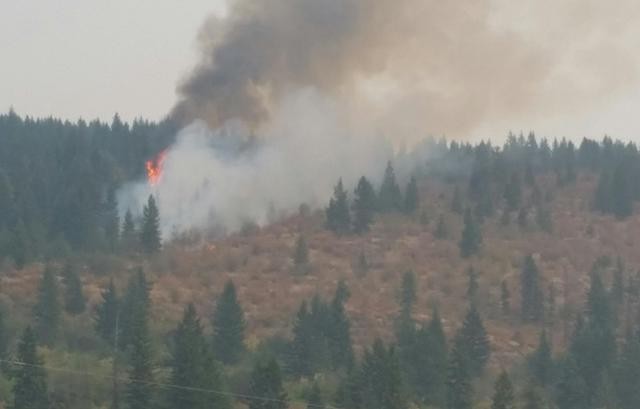 Air support is said to be over a grass fire burning in Spallumcheen, just off of Highway 97A, across from Larkin Cross Road.

The fire is heading in a southerly direction, according to an eye witness who has seen trees candling.

A wildfire is burning in Spallumcheen, in forested land off Highway 97A, across from Larkin Cross Road.

The fire, which started after 2 p.m., is said to be growing with flames on a number of fronts, according to an eye witness who has seen trees candling.

Armstrong/Spallumcheen and BX/Swan Lake firefighters are on the scene and Coldstream firefighters have been called to provide mutual aid.

BC Forestry crews were headed to the scene and had requested air support.

https://www.castanet.net/news/Vernon/20 ... fire-grows
"I don't even disagree with the bulk of what's in the Leap Manifesto. I'll put forward my Leap Manifesto in the next election." - John Horgan, 2017.
Top

MY GREATEST FEAR IS, THERE IS NO PMS, AND THIS IS MY REAL PERSONALITY.
Top

When I saw the headline I thought it was on freaking Spall Road.

In fact this may be worse.

Any news if there are evac alerts yet?

https://www.castanet.net/edition/news-s ... htm#203892
When it's all and only fun and games, no one needs to censor you. Get close to an ugly truth though...
Top

Evacuation Alerts! If you know anyone on these roads and have reason to believe they may not have heard the news, let them know.
When it's all and only fun and games, no one needs to censor you. Get close to an ugly truth though...
Top

I've have never been up in that area, I have noticed signs about housing development (20+ years at least) is their many houses up in that area.
Google maps just shows what looks like gravel pit.
"You've Gotta' Ask Yourself A Question. 'Do I Feel Lucky?' Well Do Ya...PUNK?" Harry Callahan
I don't care whether people like me or dislike me. I'm not on earth to win any popularity contests.
Top
5 posts • Page 1 of 1