They have allowed some traffic thru. My brother text me and said they let them thru the Hwy.
Top

Confirmed - I have a driver in Summerland who noticed a lot of traffic coming the other way and he is now moving North.
Top

Just listening to the scanner and the fire has jumped the highway.
Top

Yes it looks like it has basically made it all the way down to the lake.
Top

Jumped the highway? Near Greata ranch where is 4 lanes or closer to Brent Rd?
Top

Does that mean no more fuel? If it's reached the lake
I have learned that to be with those I like is enough.
WW
Top 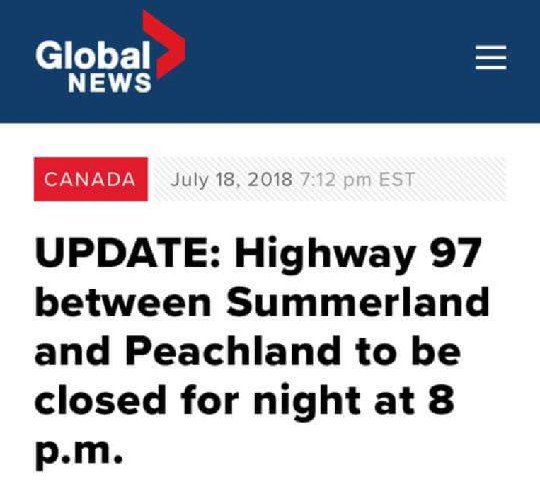 I have learned that to be with those I like is enough.
WW
Top

Confusion even over this!

An expected traffic closure to Highway 97 between Summerland and Peachland will only happen if it’s absolute necessary, according to the B.C. Wildfire Service.

Earlier today, the highway was closed because of a forest fire near Peachland.

Later on, DriveBC issued a statement saying the highway was open to alternating traffic with an RCMP escort between Peachland and Summerland. Heavy delays were to be expected.

Then came a second release, saying police would be closing Highway 97 for the night at 8 p.m.

This fire is quickly getting out of hand and is going to damage homes tonight or seriously threaten them in the coming days. I really hate to play devils advocate here but this thing started last night and was very small, probably could have been put out easily and has now grown considerably since.

Where have the crews been on this fire? Seems it wasn’t a priority until late afternoon today when it was already out of control. I mean I’ve been sitting on my deck watching it grow with no crews on it whatsoever until mid to late afternoon today. I guess this is just a vent more than anything, too late to point fingers, hopefully they get a handle on it, although at this point I have my serious doubts.
Top

You can now see flames from Brent Road fire and the west end of OMP fire.
Top

Good creek on the left, mount Eneas on the right.
You do not have the required permissions to view the files attached to this post.
Top

Huge glow coming off this one.
You do not have the required permissions to view the files attached to this post.
Top

Sounds like mutual aide has started, units being paged to go to north end of Brent Road to assist with the fire.
Top
95 posts