The JT Blackface or Brownface thread

Acting and Suntanning are racist

Lookout fellow Canadians if putting on makeup for an act or trying to change the colour of your skin are considered racist without any proven motive of hatred then we are all insane.

If this was anyone else in parliament, Trudeau would be one of the first people calling for that person to be fired or for them to quit. But since it’s Trudeau himself he will laugh it off and try to bury it deep in his closet. I think Trudeau should have looked deeper into his own closet before coming out with his zero tolerance for everyone not named Justin Trudeau rule.
Any man who can’t live by his own rules is no man at all.
Top

What about guys who dress in drag for money (opportunists), not pleasure(not judging)
Who are they offending?
Saw a commercial on tv about this recently.
Top

jimmy4321 wrote:What about guys who dress in drag for money (opportunists), not pleasure(not judging)
Who are they offending?
Saw a commercial on tv about this recently.

You must be talking about Justin in a Pride Parade or on his Mr. Dressup outfit on his India tour .

If a white guy dresses up in another culture's clothes at a costume theme party, apparently now he's a racist.

Soooo if an Asian dresses up as a cowboy, can white folks call him a racist mocking Western history and culture?

If a South Asian puts on a red/black plaid shirt, suspenders and a toque, is he/she a racist as mocking Canadian culture?

Was Trudeau dressing up on his trip to India racism? No. It simply showed him to be the drama clown that he is.

I can't stand the guy. But he has nothing to apologize for in this case.

Great costume I say, just as I'd say to the Asian Cowboy and the East Indian lumberjack.

Man...the media and the polititians are pathetic in digging up drivel.
Everything I say to you is a lie. And that's the truth. Except this time.
Top

For once we are in agreement.

I looked at this photo and thought, ya, it's a costume party before everyone went nuts about political correctedness.
Want your bags of leaves gone? Put a "free" sign on them out by the road so people can grab them.
Top

So what if this were Bernier?
Top

I'm assuming this is what's being discussed?

Sad that we as a society have become so intolerant of celebrating other's cultures.
Top

The sad fact is that had it not been Trudeau but Scheer there would be a massive amount of news coverage with complete condemnation placed upon him. The terms racist etc....would be flying around with fervor.
The double standard is the real story.
The fact this was hidden for so long is the real story.
There is no way that JT forgot this happened while he was a teacher.
There is no way that it wasn't known by people in his camp.
Why use a big word when a diminutive one will suffice.
Top

Justin being a real racist and groper all at the same time.... 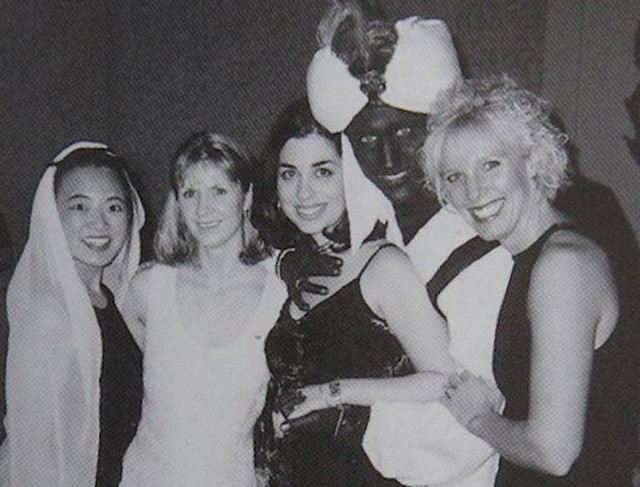 A yearbook photo of Prime Minister Justin Trudeau — his face and hands blackened by makeup — at a 2001 costume party detonated Wednesday on the federal campaign trail, instantly tarnishing the Liberal leader's bona fides as a champion of inclusivity and tolerance and stopping the party's re-election momentum squarely in its tracks.

Time magazine has posted the photo, which it says was published in the yearbook from the West Point Grey Academy, a private school in Vancouver, B.C., where Trudeau worked as a teacher before entering politics.

The photo depicts Trudeau, who was attending an "Arabian Nights"-themed gala event, wearing an elaborate turban and robe, his face, hands and neck blackened by makeup.

"It was a dumb thing to do," the prime minister said during an emergency news conference on board the Liberal campaign plane before taking off for Winnipeg.

"I'm disappointed in myself, I'm *bleep* off at myself for having done it. I wish I hadn't done it, but I did it, and I apologize for it."

I can’t imagine what else one could do at an Arabian themed party, dress like white people? lol. Can you also wear this stuff on Halloween? This is Justin living by the sword and dying by the sword of social justice ridiculousness. I personally wouldn’t have given it a second thought. The media are jumping all over this and millions of people are pretending to be shocked and offended yet I don’t see any tears. He was just having fun and his explanation of not knowing it was wrong, if it was actually wrong, is a poor excuse and lie as he is just telling people what they want to hear. Non-virtuous people are looking towards him with their own PC sense of virtue waiting for a more virtuous answer. It’s all such a stupid show.

The question I would ask is are those hands of his on a student while he was a teacher? Or is the girl a peer, or date? :-)
Last edited by Jlabute on Sep 19th, 2019, 11:18 am, edited 1 time in total.
Huxley - "For him, skepticism is the highest of duties; blind faith the one unpardonable sin."
Top

Ya, I am not outraged by this brownface thing either. It's a Arabian Night party, what was he going to do? Dress like Larry Hagman in I Dream of Jeannie?

Now the hand thing. Looks like his "victim" is a willing partner in crime and he's trying to splay out his hands to show the good browning job he did. GEEZ, does she look distressed? Don't be distressed for her folks.
Want your bags of leaves gone? Put a "free" sign on them out by the road so people can grab them.
Top

Something that happened 18 years ago. Bhahaha what a lame story and a pathetic attempt at digging up dirt.
Top

The issue isn't what he is wearing. The issue is the black/brown face.
https://www.vox.com/2014/10/29/7089591/ ... en-costume
Painting your face brown/black has been a racial thing for a long time. "today, blackface reinforces the idea that black people are appropriate targets of ridicule and mockery and reminds us of stereotypes about black criminality, and danger."
As to the hands on approach, what really matters is whether or not that is a student or a peer. Whether she is in distress or not DOES NOT MATTER. If that is a student, this opens a way bigger can of worms.
Top

It was a themed party. Arabian Nights. Ferchrissakes, no mockery involved in this case. He's not mocking anyone or race or system of slavery. I don't buy into this being a controversy once I read the background.
Want your bags of leaves gone? Put a "free" sign on them out by the road so people can grab them.
Top
549 posts