The JT Blackface or Brownface thread

As has been said many, many times.

I don't think anyone actually believes JT is racist.
It is his judgment (as an adult and professional educator) and him not disclosing these incidents of....blatant stupidity that was bound to see the light of day.
He could have gotten in front of these pictures and turned them into a "learning opportunity".

Something along the lines of:

"Even I....a paragon of virtue and social justice, can do stupid and insensitive/racist things".

Getting caught and apologizing afterwards (years later) rings hollow with a lot of people.
Despite his intent to just have a good time....blackface is very offensive to a large part of the North American population.
Last edited by Leifer on Oct 10th, 2019, 11:41 am, edited 1 time in total.
Two essential strategies for success.

Gone_Fishin wrote:Hey settle down everyone! Justin Trudeau purchased racism offsets, so they can be racist all they want. 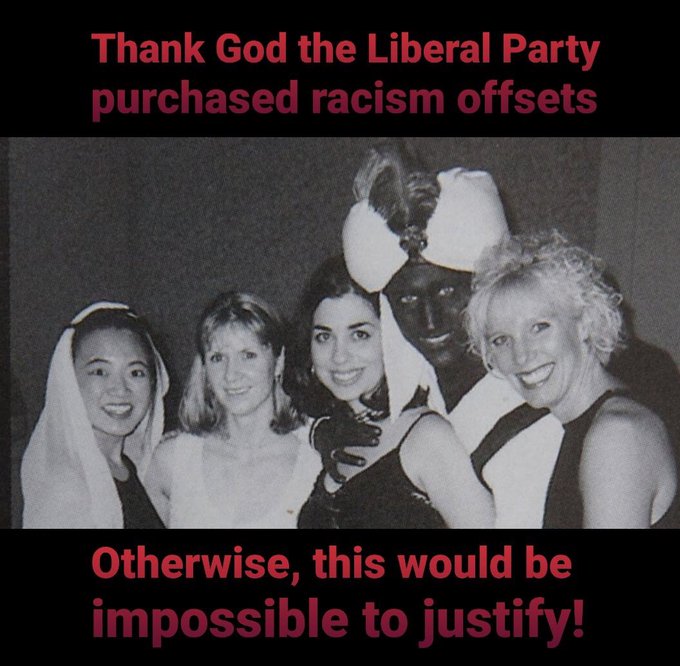 is that the student jt might of been having an affair with ? his hand is not were it should be as a teacher

The reports and social media posts which made that claim either did not cite any sources or cited only anonymous and unspecified sources. Furthermore, Trudeau has given plausible explanations for his departure which do not involve any sex scandal, namely that he was disillusioned with school administrators’ conservative approach to certain policies and that he simply wanted to move on in his career — two different but not contradictory reasons.

That Trudeau’s departure from the school had nothing to do with any sex scandal was corroborated by a statement issued in October 2019 by the school’s principal during the period in question.

Furthermore, no publicly available evidence supports the claim that Trudeau or his representatives have endeavored to suppress or cover up the supposed sex scandal. The fact that in October 2019, Canadian reporters made public their investigations and inquiries into the rumors actually undermines the credibility of the claims, since no reporting has yet emerged which would corroborate the allegations against Trudeau.

The “sex scandal” claims appear to be no more than gossip and unsubstantiated rumor, published only two weeks before Canada’s 2019 federal election, but we cannot definitively dismiss this particular set of allegations against Trudeau. Because the claims have been so vague and lacking in factual specifics (no names, dates, places, or firsthand accounts have been published) it has not yet been possible to test their credibility and therefore not possible to either corroborate or refute them. If that changes, we will update

and as we all know, for those of us that live in the real world, where there's smoke there's fire
"The further a society drifts from truth the more it will hate those who speak it." -George Orwell
Top

In this case, looks like the smoke was made up.....as in fake smoke.
Top

This would have to be the first MeToo case where there is no victim and there are no allegations from a victim.
No smoke, no fire.
The Cons will do anything to get a few more votes, but this time it's backfiring. Once again they have lied to voters, but it won't stop them from cooking up some other "scandal" in the remaining ten days of the campaign.
Top

No one is wearing black face.
Excuse me, I have to go vote this morn for a candidate that has a costed platform.
Top

I love how people just make excuses for voting the way they intended to vote all along.

"OH I can't vote for Scheer. He doesn't have a costed platform."


Meanwhile, I'll vote for Trudeau... who claimed he'll run modest deficits and then balance the budget, but came nowhere close to doing that. And he's projected massive more deficits if elected again.

"But fiscal responsibility and budgeting is important to me as a voter..."

Costed lie. That's what Trudeau did. And he'll do it again. He lied 4 years ago plain and simple. He's a liar that said one thing and did the exact opposite. This time he'll not do the exact opposite (he's learned his lesson) but will increase an already spend fest that the next generation will have a very very hard time paying off.
I guess it won't bother Trudeau's kids as they are rich, but all the rest will have a massive debt burden to shoulder because of myopic thinking of the brainwashed. The David Koresh of Canadian politics.
Why use a big word when a diminutive one will suffice.
Top

Like you were going to vote for anyone else. Don't be silly.
Why use a big word when a diminutive one will suffice.
Top

I always vote NDP. Still have the lone sign but I wouldn't want it any other way
Pretty sure Singh hasn't done white face :/ People seldom change their minds re who they will vote for, even if that Leader ate a live puppy on TV they'd say " but the other Leaders ate worse"
Only color face JT should have is red from embarassment
You can try and dirty my name, but I'll wear your hate like war paint
Top

I have voted NDP before, and I was seriously considering voting for Singh. I like him and I think he's honest and earnest. He may not be totally realistic with what he can accomplish, but I would rather vote for a guy like him who is following his passion.

I did not vote for Justin last time, but I am considering it this time. A costume that he wore 18 years ago does not factor into who I would vote for. That's why the Cons had to come up with the fake rape story, so that people would not vote for Trudeau. That is really messed up, but that's the other option we are dealing with. Some sick puppies.
Top

Silverstarqueen wrote: A costume that he wore 18 years ago does not factor into who I would vote for..

Just the tip of the ice berg. You seem pretty vocal about not wanting Trump re-elected, and yet our guy here is incredibly brutal and undeserving of the title of PM any longer. It's weird how you can be so against something you can't control or vote for, and yet want to do nothing about something almost as bad in your own country, that you can do something about. Just strange in fact.
LET'S GO BRANDON!

Silverstarqueen wrote:. That's why the Cons had to come up with the fake rape story, so that people would not vote for Trudeau. That is really messed up, but that's the other option we are dealing with. Some sick puppies.

The thing is, it may not be a fake story. Fact, there are now four different official versions as to why Trudeau suddenly left his lucrative teaching position.. Fact, Trudeau’s former roommate and best friend and fellow teacher at the same school was convicted in 2015 for possessing kiddy porn... Fact, a 17 year old girl posted a comment in the school yearbook about the fun and “interesting time” she had with her two favourite teachers, Trudeau and his pedophile best friend and fellow teacher whose name escapes me just now.....
Now that in itself doesn’t prove any actual wrong doing, but where there’s smoke, there’s sometimes fire. Those above points were all brought up during the press scrum after last night’s French language leadership debate.
Regardless, I’m heading down to vote in a few minutes. Unfortunately I won’t be canceling out your vote since Im in a different riding.