Crucifixes okay, everything else not okay

Crucifixes okay, everything else not okay 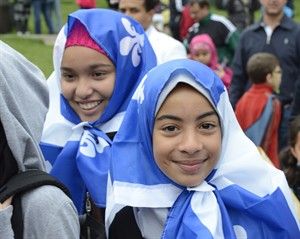 More than a thousand people are marching through the streets of Montreal Saturday afternoon to denounce Quebec's proposed charter of values.

Organizers are billing the event as an inclusive rally against restrictions on the wearing of religious symbols in the public service.

Noman Safdar, a 24 -year-old Muslim from Montreal, held up a sign that read: “Multi-faith gathering for peace."

“This is a time for all religions to come together for what they believe in, " said Safdar, an engineer.

“You can't go and impose things on people like this."

Another protester, Salma Ahmed, a 17-year-old high school student who wears a headscarf, said the proposed law is a violation of religious freedoms.

She said she's concerned it will affect her career choices and those of her classmates.

“We're all really worried at school, " said Ahmed, who came to the rally with friends who also wear headscarves.

But not all religious groups are on board with the protest.

A Jewish organization said it decided not to participate in the rally because it was planned for the holiest day on the Jewish calendar, Yom Kippur.

Quebec's Centre for Israel and Jewish Affairs said it's against the charter of values but doesn't want to be associated with some of the organizers.

The group said in a statement it doesn't want to take part in an event organized, in part, by the Quebec Collective Against Islamophobia.

"The Jewish community speaks for itself and will not accept to be co-opted or manipulated by the dubious objectives of some of the organizers of the demonstration, who include religious radical fundamentalists with whom the Jewish community will never make common cause," said the statement released Friday.

The plan unveiled by the Parti Quebecois government earlier this week has sparked a heated debate.

While opinion polls indicate there is some support for the charter, mainly in the province's outlying regions, opponents have called it discriminatory.

Adil Charkaoui, a spokesman for the Quebec Collective Against Islamophobia, has said the noontime demonstration is only one of several planned actions against the proposed charter.

Premier Pauline Marois has said the move is necessary so the public service presents a neutral face.

You cannot multiply wealth by dividing it.
Top

Quebec Government walking in footsteps of Turkey’s Ataturk.
Quebec’s Parti Quebecois government has been under attack by politicians of all colours for what brought a Muslim nation out of the Medieval Age in 1923: Turkey’s Ataturk Reformation and its dress code. Do religious symbols have a rightful place in the official places of a modern secular society?


http://www.examiner.com/article/quebec-government-walking-footsteps-of-turkey-s-ataturk
Trying to get spiritual nourishment from a two thousand year old book is like trying to suck milk from the breast of a woman who has been dead that long.
Top

Apparently the government has not decided what is the maximize size of the crucifix. And when they do, they will have to employ a bunch of people to run around Quebec with tape measures to make sure the symbols are the right size.
Top

I just read this article about the fleur-de-lys.

•The Roman Catholic Church ascribed the lily as the special emblem of the Virgin Mary.
•Due to its three "petals," the fleur-de-lis has also been used to represent the Holy Trinity.

Maybe this and the Quebec will be banned because of it's religious significance.
Top
4 posts • Page 1 of 1