Closing Burrard St bridge in downtown Vancouver for 7 hours to om it? God what next?


Burrard Bridge: Vancouver Bridge to Close for International Day of Yoga Event on June 21
The bridge will be shut down for seven hours in order to host a yoga session. British Columbia Premier Christy Clark announced the event last week, which is sponsored by Lululemon and AltaGas.

I thought we don't mix politics and religion, let alone close a bridge for 7 hours?

om
I bow to the lotus feet of the Supreme Guru
which awaken insight into the happiness of pure Being,
which are the refuge, the jungle physician,
which eliminate the delusion caused by the poisonous herb of Samsara (conditioned existence).
I prostrate before the sage Patanjali
who has thousands of radiant, white heads (as the divine serpent, Ananta)
and who has, as far as his arms, assumed the form of a man
holding a conch shell (divine sound), a wheel (discus of light or infinite time) and a sword (discrimination).
Ecclesiastes 10:2 A wise man's heart is at his right hand; but a fool's heart at his left.

Christie Clark calls out yoga haters for not agree with her.....

Twitter is aflutter with people furious over Premier Christy Clark's latest tongue in cheek post about the massive yoga event later this month.

The June 21 ‘Om the Bridge’ is intended to be the largest celebration of the International Day of Yoga outside of India, and Christy Clark says it is aimed at strengthening ties with that country.

It was immediately met with backlash from thousands who felt it was a waste of money, a publicity stunt or completely disrespectful as it coincides with National Aboriginal Day.

IntegrityBC, a government watchdog group, has also pointed out distaste in the fact the provincial government event is sponsored by Lululemon – a major donor to the BC Liberals.

Policing, planning and traffic control costs for the bridge shutdown could reach $150,000. 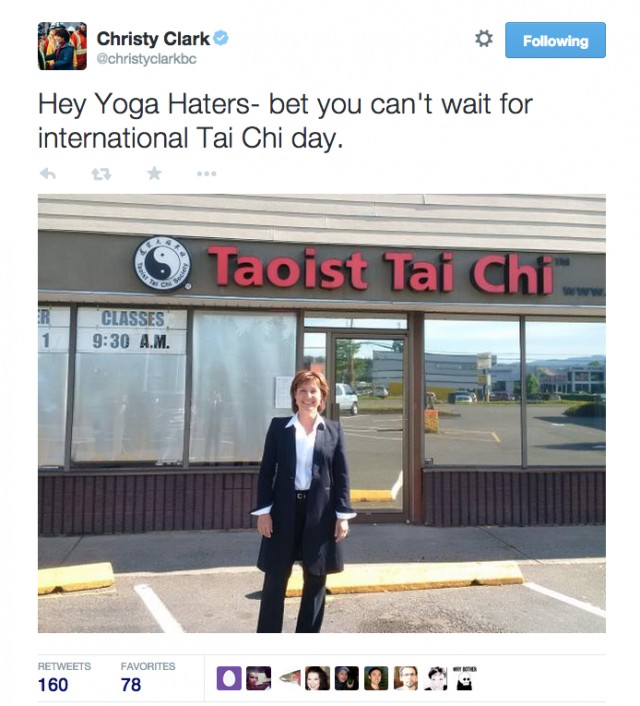 that lobotomy is really working for you.
Sometimes you eat the bear.....sometimes the bear eats you.
Top