How any Conservative supporter can defend Kenny blowing 1.5 billion for a pipeline to nowhere is beyond me. At least Alberta can thank Trudeau for a pipeline to BC that is being built. Who am I kidding? They still talk crap about Justin. Thankless people. And not too long ago there was a poll in Alberta. Notley was many points ahead of Kenny.
Top

Jason Kenney and crew seem to be following the lead of Republican governor Ron DeSantis in how they are dealing with the pandemic.

Yup, the "Florida strategy" is collapsing under the weight of of the Delta variant. Record hospitalizations. Almost all among the unvaccinated.

Alberta has a fairly low vaccination rate. better than Florida, but still on the low side. Very good chance that Kenney and crew following the "Florida strategy" is going to yield the same tragic results.
The middle path - everything in moderation, and everything in its time and order.
Top

hobbyguy wrote: ↑Aug 6th, 2021, 11:36 am Jason Kenney and crew seem to be following the lead of Republican governor Ron DeSantis in how they are dealing with the pandemic.


DeSantis is an awesome governor and probably will be president in 2024. If Kenney is going to pick US governors for role models, he couldn't have picked a better one, certainly much better than the horrid Gavin Newsome or the mass-murderer Andrew Cuomo. Good job Jason!
Justin Trudeau- racist, elitist, liar. What a sick piece of garbage.

Ron DeSantis is a pretty high bar for sure.
Justin Trudeau- racist, elitist, liar. What a sick piece of garbage.

Septuagenarian wrote: ↑Aug 6th, 2021, 4:14 pm Well I hope Kelowna's new restictions will help keep us Albetains safe. Sorry you seem to attract all the dumb ones. So please hold them there untill they test negative for us who are smart enough to avoid the place.

Unless you Albertan's are sitting inside quarantining - you are probably infecting everyone. Which is why cases have gone through the roof.
Top 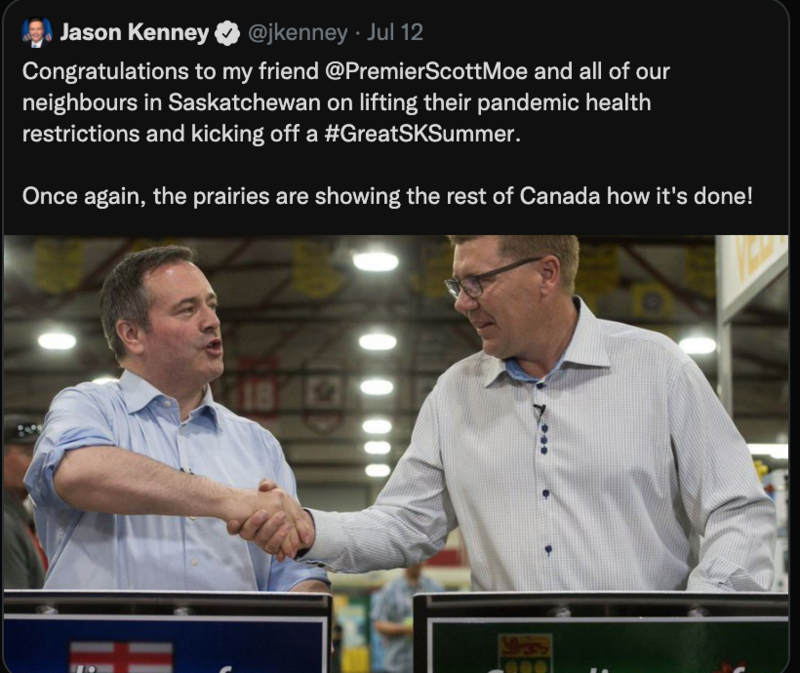 
We can only keep pace in ICU because patients are passing away. -Alberta Health Services president Dr. Verna Yiu today

Thank God Canadians prevented these dullards from running the country. (into the ground)
All posts 100% moderator approved!
Top

Amen to that. If conservatives gained control and ruined the health system nationally with covid irresponsibility - who would Canada call on for help and extra beds? Mexico? The Uk? The US? Cuba? We would be a global laughingstock!
Top 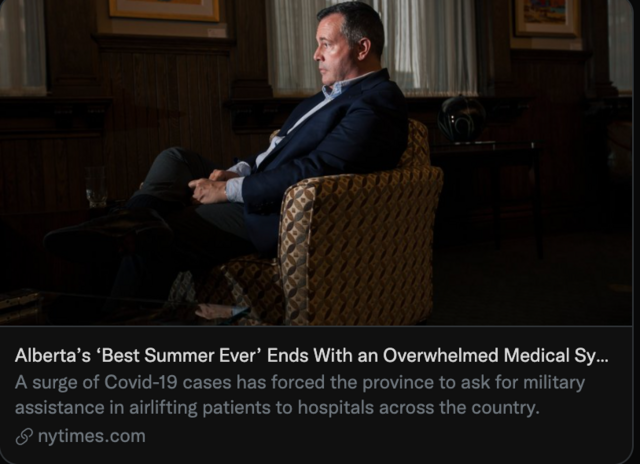 Premier Jason Kenney was roundly criticized by public health experts in June when he declared victory over the coronavirus and made Alberta the first province to largely lift pandemic restrictions.

“We finally have the upper hand on this virus and can safely open up our province,” Mr. Kenney said at a podium with a sign declaring the province was “open for summer.” Over at his United Conservative Party’s website, supporters could buy caps embroidered with the slogan: “Best Summer Ever, Alberta 2021.”

Last week, Mr. Kenney was back with a less triumphal message: the declaration of a public health emergency, while reimposing more restrictions for the second time this month, and appointing a new health minister.

As of Thursday, Alberta had 20,180 active Covid cases, nearly half of all cases in Canada, straining intensive care units at hospitals to the point that the provincial government has asked for military assistance to fly patients thousand of miles to be treated in other provinces. Since Mr. Kenney lifted restrictions on Canada Day, Covid has killed 308 people in Alberta.

“The latest campaign includes two billboards in Times Square for four weeks, and others for two weeks in high-traffic areas in New York and Washington D.C., including outside the Capital One Arena.”

Reminded me of our 'Steady Eddie' days.

“How an Alberta PR stunt backfired in the U.S., sparking a decade of oilsands opposition

Lingering concerns over infrastructure have stalled major pipeline projects at home and in the U.S., while Canada is trying to shed its reputation as an environmental laggard”

The loopy, stupid and drunken CPC/Reform/Alliance health critic could have been our health minister. {shudders}

crookedmember wrote: ↑Sep 27th, 2021, 8:00 pm The loopy, stupid and drunken CPC/Reform/Alliance health critic could have been our health minister. {shudders}

The government is projecting modest budget surpluses in each of the next three years, starting with an approximate $500-million surplus in Budget 2022.

Must be nice to have a real economy based on natural resources and not a NDP government that will never have a balanced budget.

Why use a big word when a diminutive one will suffice.
Top
1855 posts