this article is blaming global warming/climate change for more drownings. Granted that if it is not cold enough the ice will not thicken but How about if people would check the ice thickness before going on it it would not matter what the weather was?
Top

Lol. How much was paid for this study?

I think we could all have reached the conclusion that "Thinner ice increases risk of falling through ice" on our own.

What's next? A study to prove that driving faster increases risk of serious injury in a crash?
Top

This is so dumb. I mean, let's think about it logically with an example.

The temperature warms as you go from Osoyoos to Penticton to Kelowna to Vernon to Kamloops to Williams Lake to Quesnel to Prince George to MacKenzie, etc. Now, are there more drownings per capita in Osoyoos than Kelowna, Kamloops, and Prince George?
"No one has the right to apologize for something they did not do, and no one has the right to accept an apology if the wrong was not done to them."
- Douglas Murray
Top

20 years ago we were told by these "researchers" that snow and winter would soon be a thing of the past for most of Europe, including the UK. These idiots were dead wrong, but yet where is the accountability? Why aren't these people being charged for fraud?

And an even better question - what IDIOT paid these people to do this useless and stupid "research". I think we already know the answer to that one.
Justin Trudeau- racist, elitist, liar. What a sick piece of garbage.

And from the article,
An analysis of thousands of winter drownings from around the world shows that risks increase dramatically as air temperatures near zero.

Isn't that what happens in the spring, or even any time during a warm spell in the winter?

Maybe the study should have gone one step closer and possibly found that the dumbing down of humanity is caused by climate change.
From this study I came to the conclusion that people out on thin ice are just stupid.

Group playing hockey impo the ice should be at minimum 16cm thick, I rather play it safe then sorry.

If someone wants to take their truck out i.e 1/2 ton (imo foolish) minimum 26cm.

It’s highly doubtful it will get cold enough and long enough to either on Duck Lake, anything possible.
I don't give a damn whether people/posters like me or dislike me, I'm not on earth to win any popularity contests.
birdsarentreal.com
Top 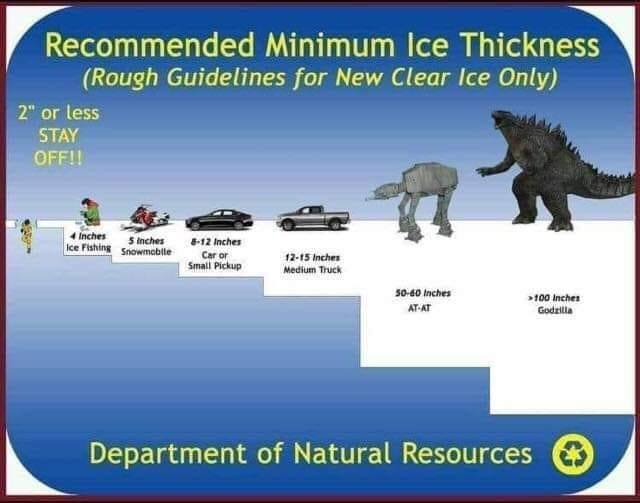 Read the title of this thread and thought it might identify or compare with my life.
It actually is about thin ice.
Some may view my politically incorrect opinions as harsh and may be offended by them. Some think political correctness will be our undoing.
Top

First off, why don't news organizations provide a link to the study when they publish a story which is all about a study that is on the internet. Everybody that wants to see if the reporting is reflective of the study has to spend time finding the study. Link to study below.

The article and the study are flawed. Here are some comments.

In the article the term "climate change" is used often, in the study it is never used.

No where in the study do they mention if activity on the ice has increased or decreased over the last 25 years. If it has then any increase in drownings would be expected. There is no mention of the difference of population over the 25 years of the study.

If Latvia and Estonia were removed from the study, the findings would not indicate increased drownings.

This finding probably has more to do with the drownings then anything else especially for Canada and USA.

Insufficient training, lack of regulations or challenges of enforcing regulations when they do exist, and high rates of impaired driving increase risk-taking behaviour on snowmobiles, such as driving at high speeds and over patches of open water

I do think climate change is real, but these kind of studies and reporting do nothing to convince non-believers and only give them ammunition to argue the point.

Re: People on thin ice

Everyone has been warned, so hopefully if someone falls through the ice there is help nearby.
https://www.castanet.net/news/Kelowna/3 ... ue-to-rise

Good luck to skaters
I don't give a damn whether people/posters like me or dislike me, I'm not on earth to win any popularity contests.
birdsarentreal.com
Top

Re: People on thin ice

I fully agree Genesis GT. I'm becoming a real pain in the *bleep* to all the Castanet reporters because when they do something like that and leave out very pertinent information in a story they wrote I do not hesitate to email them and call them out. I'm sure they're getting tired of me constantly making fun of the fact they call themselves journalists or reporters
You don't learn when you are talking. You can only learn while you're listening.
Top
11 posts • Page 1 of 1