I've always said that Liberals are a bunch of dicks. Proof positive. 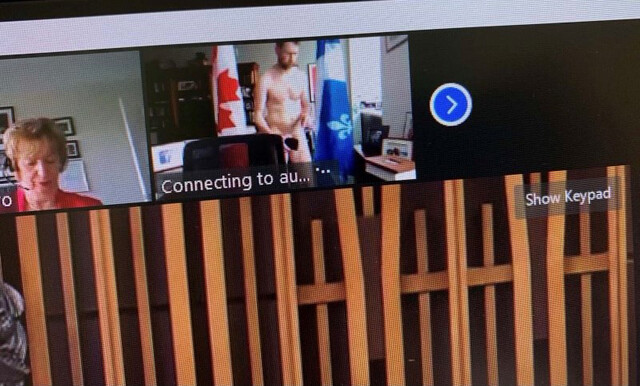 A Liberal MP was caught wearing his birthday suit in the virtual House of Commons.

William Amos, who has represented the Quebec riding of Pontiac since 2015, appeared on the screens of his fellow members of Parliament completely naked Wednesday.

A screenshot obtained by The Canadian Press shows him standing behind a desk between the Quebec and Canadian flags, his private parts hidden by what appears to be a mobile phone in one hand.

"This was an unfortunate error," Amos said in a statement sent by email Wednesday.

"My video was accidentally turned on as I was changing into my work clothes after going for a jog. I sincerely apologize to my colleagues in the House of Commons for this unintentional distraction. Obviously, it was an honest mistake and it won’t happen again.”

Bloc Québécois MP Claude DeBellefeuille, the party whip, raised the incident in a point of order after question period, suggesting that parliamentary decorum requires male MPs to wear a jacket and tie — and a shirt, underwear and trousers.

Speaker Anthony Rota later thanked DeBellefeuille for her "observations" and clarified that while he had not seen anything, he checked with technicians and confirmed they saw something.

He reminded MPs to always be vigilant when they are near a camera and microphone.

Amos, the parliamentary secretary to Industry Minister Francois-Philippe Champagne, was visible only to MPs and staffers on an internal video conference feed. Because he was not speaking during question period, his image did not show up on the public feed.

Idiot - changing his clothes with his cell phone in hand? Ya right.
Truths can be backed up by facts - do you have any?
Fancy this, Fancy that and by the way, T*t for Tat
Top

Fancy wrote:Idiot - changing his clothes with his cell phone in hand? Ya right.

Yeahhhh. Was just changing his clothes after a jog? Underwear too? If he had a shower, would he not get dressed in the bathroom? And what's with the phone? Sending a little pic to someone special? The whole thing is ewwwww.
Life is a banquet and most poor suckers are starving to death.
Top

While his example is not the brightest thing to do I've been known to change clothes in my office, but I do have limits as to how bare to dare. My coworkers happening to peer in through the frosted glass at my Walking Dead or pumpkin covered gitch I'd be embarrASSed, anything more to see and I'd be walked out of the building for good reason.
Top

It’s amazing what a piece of black electrical can do on a camera lens, maybe this jack

should learn to use some.

I don't give a damn whether people/posters like me or dislike me, I'm not on earth to win any popularity contests.
birdsarentreal.com
Top

At least he wasn't in the bathroom

Looks like he must have been watching "This is Us"
How unoriginal, guess he wanted attention

I thought it was just blacked out, the fact he might be taking a dik pik makes it even better
Why is it never someone like Jason Momoa we get to see?
Changing after jogging... surrrrreeee
AIADMF
Top

not saying much if he can hid it that well with a small cel phone :)
I was thinking more Summer Breeze
AIADMF
Top

There does not appear to be any clothes for him to change into. His story does not add up.

Maybe he was just trying to get the “honourable member” to stand up.

Maybe he just wanted to show that when you bare it all you have literally nothing left to hide!
I really like your post, just can’t find the button.
Top
68 posts