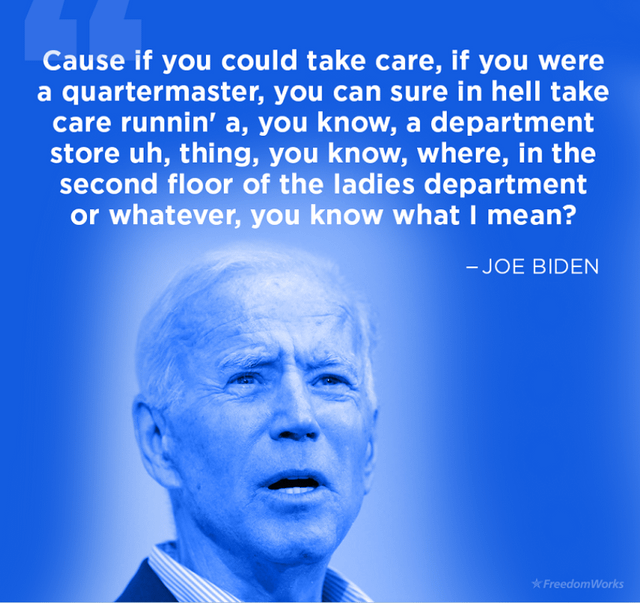 A thread for actual discussion ? Or yet another collection of memes and cheap insults ?
How can a worker be both essential and unworthy of a living wage ?
Top

fluffy wrote: A thread for actual discussion ? Or yet another collection of memes and cheap insults ?

Do I need to lock this already?

Joe Biden would be a weak president

Joe Biden and Barack Obama had eight years to accomplish everything they are now blaming Trump for not accomplishing. Their Iran nuclear agreement lifted some sanctions that resulted in billions in cash going to Iran, a country that hates America and Israel. This is why it’s an extraordinary feat of diplomacy Trump has brokered recognition from several heads of Islamic states to establish relations with Israel.

Quite a difference from the once rallying cry inspired by Yassir Arafat's threat to “push the Israelis into the sea.” If Biden where to be questioned about the Middle East he would need a teleprompter to give an answer. My question is, who writes the reply?

Biden is a Catholic in name only. He would support Planned Parenthood, the institution founded by Margaret Sanger, who once praised birth control as a way to get rid of "those human weeds which threaten the blooming of the finest flowers of American civilization.”

China is now one of the most dangerous countries in the world. They want to dominate not just using their technology companies but unleash a formidable military. Look at the border clashes with India, the crackdown on Hong Kong and Taiwan, the outrages claim to the South China Sea that has Japan, Taiwan and the Philippines on high alert.

Trump has countered these threats with a careful measured response to let the Chinese know we see what they are up to. I think China would throw a party if Biden got in.

Abraham Lincoln said no country in the world can bring about the fall of America as it can only come from within. Antifa and other protesters, with the silent consent of some Democratic governors, ushered in this “summer of love.”

I blame the breakdown of the family, which some leftist groups want, and our powerful teachers and the unions that support them for teaching kids that America is a bad country and to demonstrate with hate.

The Green Barbarian wrote:I think China would throw a party if Biden got in.

I'm also planning to throw a party when Biden is elected.
Top

fluffy wrote:A thread for actual discussion ? Or yet another collection of memes and cheap insults ?

What in the meme I posted is a "cheap insult" exactly?
LET'S GO BRANDON!

It was a huddle to marshal the faithful, featuring dozens of Black luminaries, from hip hop mogul Jay-Z to radio personality Charlamagne tha God to civil rights attorney Ben Crump. Vice presidential candidate Kamala Harris presided over the virtual meeting, which grappled with a nagging question for Joe Biden’s campaign: How to woo more Black men?

Last week’s call was the second in as many weeks focusing on Biden’s appeals to Black male voters. The mood, Crump said, was upbeat. But callers were frank about their concerns, urging Biden to deliver a positive message, so “it’s not just about anti-Trump but what we’re going to do on our side.”

Where Joe Biden Is Underperforming Hillary Clinton
The Democratic nominee has a Latino-voter problem.

But when it comes to Latinos, Biden may have a problem. Although he’s dramatically outpacing Trump among Latinos overall, he’s falling behind Clinton’s pace, including in the key state of Florida. An analysis by Harry Enten at CNN found that Biden’s average lead among Latinos is 9 points lower than Clinton’s around this time four years ago. If Biden can’t close the deal with this crucial constituency, it could spell trouble for him across the country.

^^^^^^^
This somewhat makes sense. But because this is "the Atlantic" and they specialize in fake news, the moronic reporter then writes this tripe:

That Trump’s standing among the Latino community could have improved at all over the past few years might strike many people as utterly shocking. Since he descended that escalator in 2015, Trump has disparaged immigrants as “rapists,” made up horror stories about northbound caravans set on invading the country, locked up immigrant children in despicable conditions, lashed out at Puerto Rico after a hurricane demolished the island, and empowered ICE to do a variety of ghastly things, including separating families and reportedly assaulting detainees in camera blindspots. What’s more, his administration bungled the COVID-19 pandemic that has killed Latinos at a disproportionate rate.

LOL - hey fake news purveyors, "Latinos" and most others aren't falling for your lies. So keep spewing this nonsense. It's just digging the hole deeper. Talk about delusional. But then the Atlantic is owned by Democrat supporters, so they have to post lies, it's all they know.

I can't recall the respectful Joe Biden calling the Latinos rapists, drug dealer and murders. Did Joe Biden suggest building a wall that Mexico would pay for to keep the Mexican who are all drug dealers and rapist out of the US? I also can't recall Biden saying blacks and Hispanics are so "stupid".

They certainly would be pretty "stupid" if they don't vote for Biden because the other guy doesn't even want to shake hands with these "disgusting people".

foenix wrote:I can't recall the respectful Joe Biden calling the Latinos rapists, drug dealer and murders. Did Joe Biden suggest building a wall that Mexico would pay for to keep the Mexican who are all drug dealers and rapist out of the US? I also can't recall Biden saying blacks and Hispanics are so "stupid".

I don't recall anyone saying this. I do recall Joe Biden saying "if you don't vote for me you ain't Black", or some such nonsense. Man that guy is a gaffe machine that never stops.

No, they'd be pretty smart if they don't vote for him.

because the other guy doesn't even want to shake hands with these "disgusting people".

The Epic Blandness of the Joe Biden Campaign
Democrats are counting on the cult of non-personality to end the flamboyant Trump era.

Back in early 2019, a group of about 15 campaign journalists took part in an informal survey of who they expected to be the Democratic presidential nominee.

These reporters and editors, I happen to know, are all smart and well-connected. Unfortunately, the survey results cannot be offered as an exhibit for the case. The person who received the most predictions as eventual nominee was Beto O’Rourke. (Yes, same here: This will refresh your memory.) The person who came in a close second was Kamala Harris. Joe Biden was predicted by zero respondents.

The survey is an artifact of the past that illuminates two important points about the present.

The obvious point is about the fallibility of prediction, and the frequency with which the political-media class fails to perceive powerful currents in the electorate. That’s worth remembering on the brink of virtual conventions, when a lot of coverage is describing the Biden-Harris ticket as in command of the race.

The less obvious point is the more consequential. For the moment, Biden looks to be transforming a political culture, with its corresponding customs, that has prevailed for six decades. It is an astonishing achievement for a candidate whose public career, at the start of the year, looked like it had just a few weeks left to live.

Reporters 20 months ago—or even six months ago, after Biden’s shockingly weak finishes in the first three states of the nominating contest—were viewing the former vice president through the prism of a familiar standard. Since JFK inaugurated the television era of politics in 1960, successful presidential candidates have been theatrical candidates. The exceptions, like Gerald Ford or George H.W. Bush, had short tenures that tended to prove the rule. Winning politicians have had narrative electricity—they were performers and storytellers who could command the attention of people who loathed them no less than those who revered them.

2020 Democratic presidential candidate Joe Biden had another gaffe on Sunday when he said an estimated 200 million people have already died from the coronavirus, even though the number of American casualties is closer to 200,000.

"If Donald Trump has his way, the complications from COVID-19, which are well beyond what they should be -- it's estimated that 200 million people have died -- probably by the time I finish this talk," he said during a campaign speech.

The U.S. population is estimated to be slightly 328 million people, meaning nearly two-thirds of the nation would have perished from the disease by now if Biden's verbal screw-up was true.

This isn't the first time Biden has mixed up his math and made head-scratching remarks about the coronavirus mortality rate.

Back in June, Biden wrongly claimed 120 million people had died as a result of COVID-19, during a campaign stop in Pennsylvania.

I don't see anyone reporting about this on CNN or MSNBC. Why is that I wonder? If Trump had said 200 million people had died, Rachel Madcow's head would be exploding. But if Biden does it? Meh.
LET'S GO BRANDON!

Justin Trudeau is a blight on our once great country.
Top
2014 posts