Bandera was involved in the massacre of Jews and Poles not traditional ethnic Ukrainians.
"When the whole world is running towards a cliff, he who is running in the opposite direction appears to have lost his mind".
~C. S. Lewis
Top

George Soros, the Hungarian-born billionaire behind the globalist open borders Open Society Foundation, has been named the second-most influential figure in Ukraine according to a prominent Russian-language Ukrainian newspaper.

The Kyiv-based newspaper points out that, “through the organizations financed by him, Soros can influence economic and political life in all of Ukraine.”

The paper writes that Soros, who is known for his active involvement in Ukraine’s economic and political life for more than 20 years, maintains a unique position of power through the Open Society Foundation and the dozens of other organizations he funds in the country.
https://rmx.news/article/soros-second-m ... n-ukraine/

Now why would he be that important to Ukraine, I wonder? But I like the youtube comments on the lizard-like guy.

Can someone please send me in the direction of Soros' time management book? How does he do it all? I must know.

The war in Ukraine was started in 2014 by the Americans.

$5 billion corrupt American dollars flowed into Ukraine after the pro-Ukraine president, Victor Yanukovich - was booted out by America. That's when Victoria Nuland, the goon hired by Obama, gave cookies to the Ukrainian people to show them she considers them to be dogs - here's a treat.

Also, George Soros (is he a lizard) - hated for the way he screws people over, all over the world was so satisfied when he said "that was the birth of the new Ukraine" when snipers opened fire in Kiev killing seventy in 2014 - and injuring hundreds and 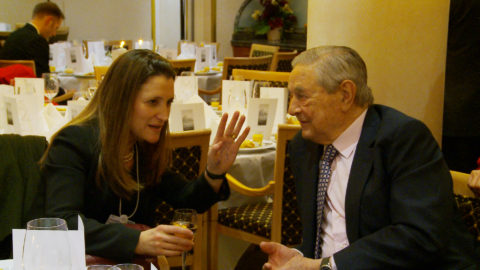 s on democracy? Now Canadian taxpayers are paying for the war in Ukraine. Did you hear the news? Freeland is shoving our $billions into the war, while one kid in five in BC lives in poverty. Canada joined the war by giving $billions, and now we might be nuked - thanks Chrystia - you war loving idiot.

Does anyone else find it funny, when the Americans started the war in Ukraine - on Donetsk -
bombing their airport, and slaughtering 14,000 people, and terrorizing (genocide) those people for eight years - it was in the most prosperous area of Ukraine?


..
You do not have the required permissions to view the files attached to this post.
If you have to be persuaded reminded bullied pressured bribed incentivized, lied to, guilt tripped, coerced, socially shamed, censored, threatened, paid, punished and criminalized, to gain your compliance- the thing is no good
Top 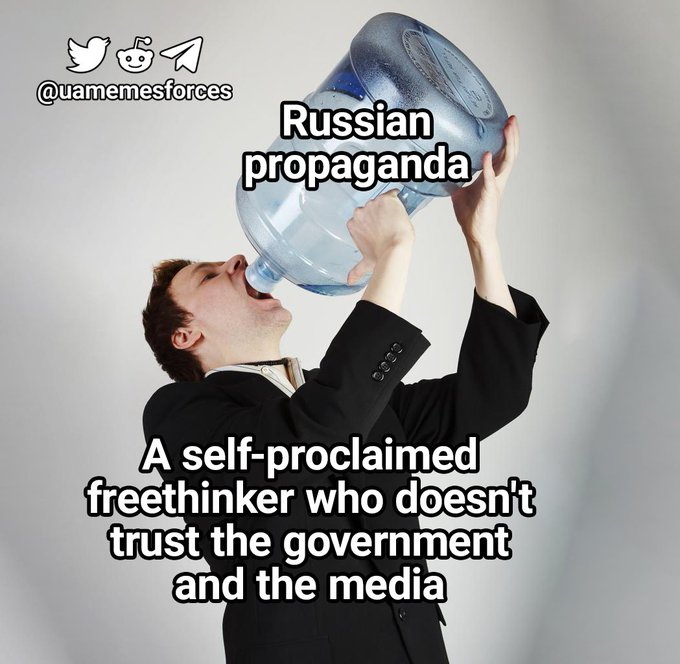 I mean seriously, when your best off topic argument is a short clip, void of any context what-so-ever, on the "Soviet Union channel" with 20 followers... maybe you should sit this one out?

- Ukraine Russia war News.
Drip Torch - an upright and steadfast keeper of the flame, but when tilted sideways the contents spill and then our destiny is in the wind...
Top

It's nuanced they'll tell me. Stepan Bandera, George Soros, Victoria Nuland, Victor Yanukovich, 2014. Oh 2014, it all started in 2014, in fact there was no history worth considering before 2014, except for that period in the 40's, but nothing else. There's 32 years that simply didn't happen.

Those 32 years don't matter, just like international law, duly signed agreements and international boundaries. To the "it's nuanced crowd" the fact that Russia negotiated an agreement with Ukraine for the lease of the bases in Sevastopol makes perfect sense, "because Crimea is Russia". *Insert bewildered dog with head tilted sideways smile here*

Anyways, I don't know how to argue with these folks and I'm even less sure why anyone would.

So hey, how about a couple rounds of "pick your fighter"?

The first one I've got is set up for the non-twitter users in the crowd.

Here we go... Pick your fighter:

Round 2 (sorry non-twitter dude, you're out) ... Pick your fighter:

Me, I'm on the side that isn't threatening you with the use of nuclear weapons, the side that respects international law and the side that carries itself with dignity. The side that every political party that sits in Ottawa is on. Russia can't win this war - and they won't. It's hard to imagine anything good coming out of a war as ugly as this is. Myself, I just hope when all is said and done, the Russian people will fight for a better life for themselves. At least half as hard as they are fighting for a better life for Putin and his gangsters.

ETA: I had to go searching for this song. I prefer the metal version, but this one has far better videography.

Drip Torch - an upright and steadfast keeper of the flame, but when tilted sideways the contents spill and then our destiny is in the wind...
Top

russian people are waking up https://www.castanet.net/news/World/387 ... -up#387129
"The further a society drifts from truth the more it will hate those who speak it." -George Orwell
Top

The guy on the far left is waving Bandera flag...

https://notesfrompoland.com/2022/07/01/ ... -and-jews/
"When the whole world is running towards a cliff, he who is running in the opposite direction appears to have lost his mind".
~C. S. Lewis
Top

Yeah, the video is brutal. 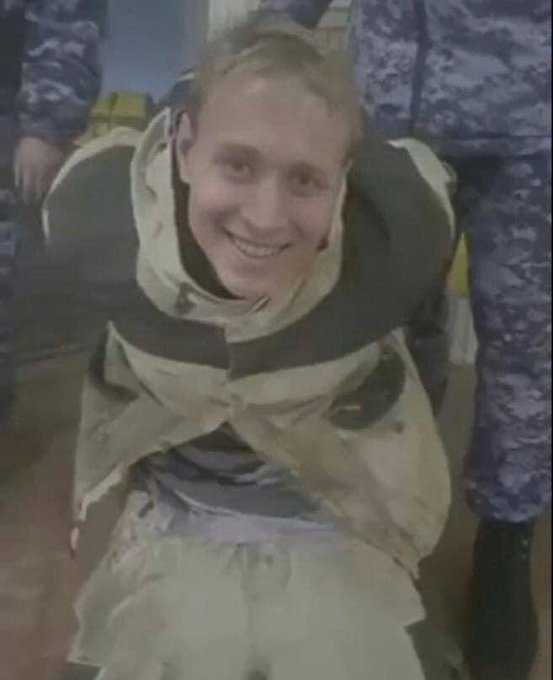 Not a bad plan though, all things considered. The kid is facing 8 years as it stands. The penalty for avoiding conscription is 10 years. There's something about that look on his face that says, "I've done the math".

All in all, there seems to be some internal issues with the conscription call up and even Putin's chief propagandist is disappointed.

In other news, apparently the first wave of conscripts has arrived in the Luhansk region. 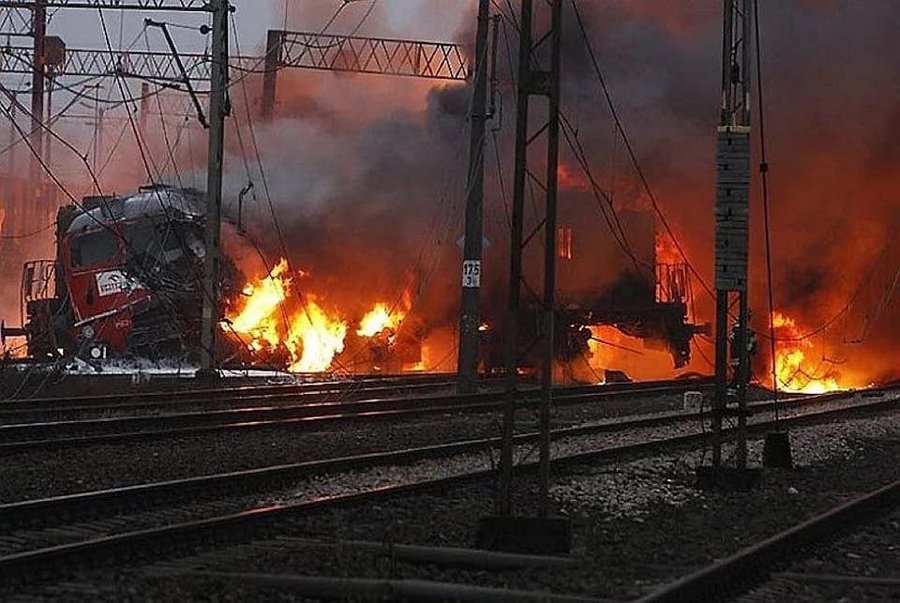 Google Machine translate: It seems that the first echelon of mobilizations in the Russian Federation arrived in the Lugansk region. The stench is already denounced by ZSU officers like 200 and 300. Let's die for Putin's VV, I want to help my health.

*sigh* Hopefully the Russians can come up with some gun oil so the next batch of little sunflowers can clean up those rifle barrels while they carry them forward the next few kilometers.
Last edited by Drip_Torch on Sep 26th, 2022, 10:48 am, edited 4 times in total.
Drip Torch - an upright and steadfast keeper of the flame, but when tilted sideways the contents spill and then our destiny is in the wind...
Top

Of course there was "no damage" of course They'd never admit it if there was.

https://www.msn.com/en-ca/news/world/hu ... c5da8c8d33
Spend some time and money on establishing an Estate plan, a Legal Will, your wishes and who is the Executor. Watch Grant of Probate videos. Understand the process to help yourself and loved ones.
Top

"Putin's chef" is finally forced to admit he's been cooking up a little more than Putin's lunch. Ha ha ha, I guess those videos of him recruiting in prisons finally forced his hand.


Yevgeny Prigozhin, a Russian businessman and a close ally of Vladimir Putin, has admitted that he founded the Wagner Group private military company in 2014, the first public confirmation of a link he has previously denied.
...
Wagner has been accused of committing human rights abuses in Ukraine, Syria, Libya, Central African Republic, Sudan and Mozambique. The group’s alleged co-founder, Dmitry Utkin, has been linked to the far right and is believed to have named the group after Hitler’s favourite composer. The US and EU have imposed sanctions on Prigozhin and Utkin for their role in Wagner.

I'm not going to post this video here, (because it really doesn't end well) but I suspect this is just the beginning.
.
drunk-*bleep*.jpg
Clearly hammered and staggering. Shouting while carrying the Russian flag and firing his weapon towards Ukrainian lines. The video of him carrying the flag forward is about 45 seconds long... about as long as it took to direct fire onto him.

Reportedly, the war is over for him and 3 of his giggling compatriots, but to his credit, he did manage to advance the flag and his rifle about 15 meters.

But hey, I'll post this video here... and you'll get the gist of it all. 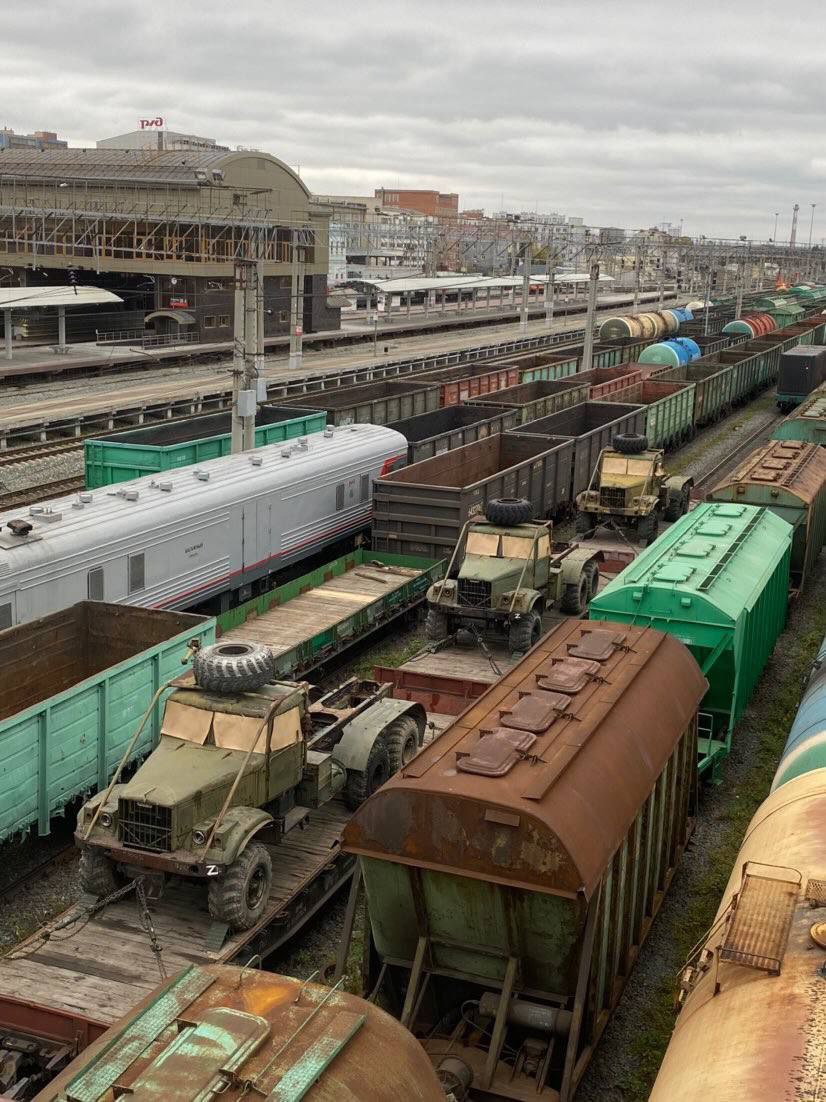 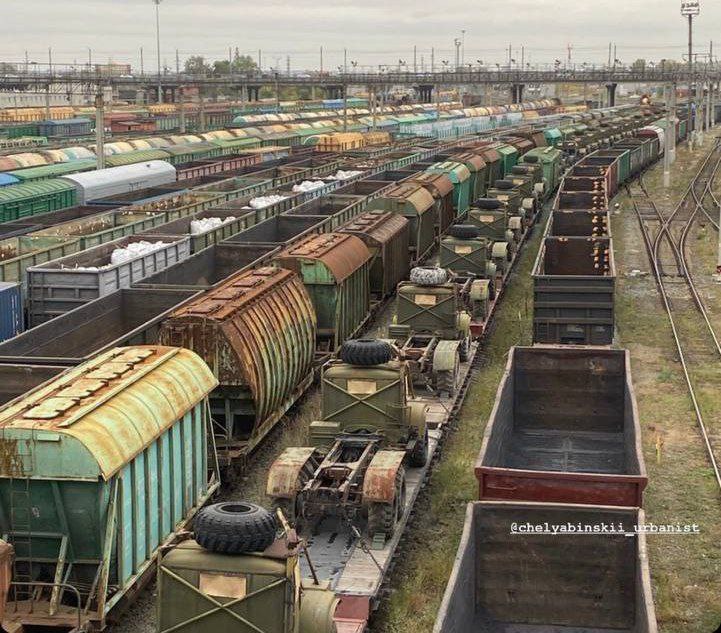 KrAZ 255's. A Ukrainian made copy of the 200,000 Studebaker trucks the US sent the Soviet Union for WWII. I guess they are going to give them back?

How's the mobilization going? Well, prevention is the best and only medicine. Oh, and you'll all need to phone your wives...

Classic catch 22. Can't fight a war in another country and can't fight against the war in their own country. I get the impression there is a bit of a pushback going on. Not often, okay never, have I seen Margarita Simonyan and Vladimir Solovyov say anything negative about anything, other than the West, the US and NATO.

This one is really odd.

(somethings got to give here soon.)

Something really good happening in Georgia this week? Wonder why everyone is lining up at the border?

drone footage ---> https://twitter.com/i/status/1574354919682969602
You do not have the required permissions to view the files attached to this post.
Drip Torch - an upright and steadfast keeper of the flame, but when tilted sideways the contents spill and then our destiny is in the wind...
Top

Not much real news out there right now, as can be judged by the stream of drivel here. Unfortunately the Western advantages in Web Design and TikTok memes wont count for much once it kicks off again.

How about a link detailing the next tranche of weapons or cash to Ukraine?? Anyone??? Hmmm... maybe its not coming?

Back to unnamed officials and drunk russkies...
Top

12 billion working its way through the pipeline right now and I quite expect more from other countries. Get back to you in a day, maybe two. Nah, just checked, I doubt it's two. Oh, and there's an additional $3.6 billion in Presidential Drawdown Authority. Missed that earlier.

NATO has delivered 200,000 winter kits and more are to be delivered. Meanwhile Russian troops are being told to bring their own sleeping bags and pads. (You still won't look at those twitter links - eh?)
.
Untitled-3.jpg
https://www.canada.ca/en/department-nat ... raine.html

You do not have the required permissions to view the files attached to this post.
Drip Torch - an upright and steadfast keeper of the flame, but when tilted sideways the contents spill and then our destiny is in the wind...
Top

Drip_Torch wrote: ↑Sep 26th, 2022, 5:49 pm 12 billion working its way through the pipeline right now and I quite expect more from other countries. Get back to you in a day, maybe two. Nah, just checked, I doubt it's two. Oh, and there's an additional $3.6 billion in Presidential Drawdown Authority. Missed that earlier.

Why are western countries sending so much money to one of the most corrupt countries on the planet? We got a medical system in shambles here and we're sending money to Ukraine!?!
"When the whole world is running towards a cliff, he who is running in the opposite direction appears to have lost his mind".
~C. S. Lewis
Top

If it was real weapons it would be plastered everywhere. There are basically no stories in the western press other than "chaotic russian mobilization". Putin upped the ante and we empty our pockets and shrug... but great spin on it though.

$4.5 billion to fund Ukrainian government in Q4? Not much bang for the buck there.

Why are western countries sending so much money to one of the most corrupt countries on the planet? We got a medical system in shambles here and we're sending money to Ukraine!?!
[/quote]

BINGO!! Two of the most corrupt countries on the planet and we should care tht they blow each other up? Why? The only reason the western world is involved is because corrupt politicians are making hand over fist off of it. WHAT ABOUT OUR OWN PEOPLE IN OUR OWN COUNTRY?!
Top
2583 posts