Social, economic and environmental issues in our ever-changing world.
269 posts

Every day we see the bad news, and sometimes, at least to me, it feels as though humanity is headed to hell in a handbasket.

Then a story comes out that reminds us that no, there are plenty of other stories, ones of hope and goodwill and kindnesses done. Stories that make us feel good.

This thread is solely for those feel-good stories. Curmudgeons be aware: Negativity in this thread is not going to fly.

Thank you to coffeeFreak for suggesting this in the Suggestions forum.
Top

This site always has super vids, I adore this one
If they can do it we should be able to get along
http://www.edisproduction.de/2013/12/11 ... t-friends/
You can try and dirty my name, but I'll wear your hate like war paint
Top

What a great idea, the Random-Act-of-Kindness project:

A man disguised as a homeless person on the streets of Vancouver has been handing out cash to the kind strangers trying to help him.

Yogi Omar is one of those kind strangers. When he saw the derelict-looking man with a scruffy beard sitting on a street corner and asking for change around midnight on Wednesday, he struck up a conversation with him and offered to buy him a meal and warm clothing.

The man confessed he wasn't actually homeless, just participating in an annual random-act-of-kindness project in which he and his family help people who are kind to Vancouver's homeless population.

The man asked Omar how much he paid in rent — then gave him that exact amount in cash.

The stranger's generosity had perfect timing. Omar recently had to plan a last-minute trip to China to visit his terminally ill father.

"We started talking and I shared my story about my dad suffering from cancer and that I'm spending a lot of my savings to buy last minute plane tickets to see him in China and that I'm on a bit of a pinch financially. Guess what...he decided to pay for my January rent," Omar wrote on Facebook.

To the stranger on the street corner, Omar told CBC News he wanted to simply say, "Thank you."

"I hope people see this and just share the love with people around them. Be kind and share the love," he told Metro News.
Vancouver woman Amanda Adams shared a similar story online.

"I wasn't the only one! This happened to her too!!! Maybe this guy is really Santa!" wrote Omar.

first website i check in the mornings. They update about 3 or 4 times a day, so I get to start out every day with a bunch of cute pictures of baby animals
"Dishwashers, the dishwasher, right? You press it. Remember the dishwasher, you press it, there'd be like an explosion. Five minutes later you open it up the steam pours out, the dishes -- now you press it 12 times, women tell me again." - Trump
Top 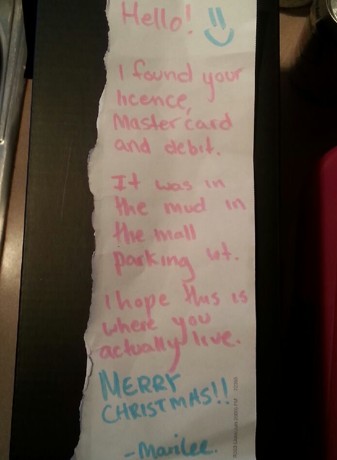 An anonymous shopper left little doubt that the Christmas spirit is still alive and well even after the gifts have all been opened.

A girl by the name of "Marilee" left a handwritten note on the front door of a stranger's house, along with the owner's missing license, Mastercard and debit card.

The distressed owner of the lost cards was relieved to find her items returned, after they had been found stuck in the mud in the Orchard Park Mall parking lot.

The woman invites the anonymous shopper to contact her so she can say "thanks!"

You cannot multiply wealth by dividing it.
Top

What a great way to show just who you are as a person. When we had our son's ashes spread on an Island at Beaver Lake, I went up 2 days earlier to get things together for all the people coming up to say goodbye. I met some people that were not prepared and talked to them and gave them food and firewood and the children candy. I sat with my dogs after supper and a couple of Pilseners and one of the things I came up with thinking of my boy and what he meant and what he did for his friends was, this is a place now of peace and joy, a random act of kindess is all it takes to feel good about who you are and what you can share.
Top

Light out of darkness Metallica. Thank you for sharing the story and thank you for finding the good message in a bad situation.
Praise the lord and pass the ammunition
Top

I liked the story about the cab driver in Vegas that found 300K in his car. Tracked the owner down was called employee of the year given a 10K tip a 1000 steak house gift card and basically said to be a good person.

I'm impressed by that guy. 300K is hard to look at and not take.
Top

On Christmas Eve, a delightful delivery was made to a Winnipeg seniors' residence: a semi-truck full of fresh flowers.

An anonymous donor sent the flowers, estimated to be worth more than $10,000, to Holy Family Home in the city's North End.

The semi-trailer was packed floor-to-ceiling with boxes of flowers, including eight packages of two dozen roses each, hundreds of carnations and mini-roses and more than enough pre-made arrangements to ensure that each of the 276 residents could have their own, the Winnipeg Free Press reported.

The cheerful delivery men, who were "in such a good spirit," refused to tell receptionist Luca Micno who sent them.

"We asked who delivered them, but they just kept naming places the flowers were grown," Micno said.

The flowers were distributed among residents, their families and staff.

"It really cheered everybody right up," said Katherine Skotnicki, a Holy Family Home resident. "I had some delivered right to my room. For me, I was wondering what was happening for us to get that many flowers."

"I thought it was just great," she told the Winnipeg Free Press. "It's really nice to see the flowers on every table. It seems like everyone was quite happy with them."

"Their faces were just lighting up. I mean, it just was a beautiful event, a real blessing," Jean Piche, CEO of the Ukrainian Catholic-run residence, told CBC News.

"It just made a really lasting and positive impact on the people who live here."
Dance as if no one's watching, sing as if no one's listening, and live everyday as if it were your last.

Life is not about waiting for the storm to pass. It's about learning to dance in the rain.
Top

Wouldn't this just thrill the kids?? These are window washers at a Children's Hospital:
You do not have the required permissions to view the files attached to this post.
Overpopulation threatens all life on earth.
Top

. When Billy Ray Harris, a 55-year-old homeless man, returned the engagement ring that Sarah Darling had accidentally dropped in his cup along with some change, he got far more than the money the ring would have brought him: He reconnected with the family he hadn't seen in 16 years, and received more than $175,000 from supporters to find a new home. Six months later, he'd turned his life around.

Thanks to a 3D printer and a compassionate stranger, 16-year-old Daniel Omar has a new arm.

The Sudanese teenager was the subject of a 2012 TIME story. He lost his hands in a bomb attack by the government on rebel forces. And while American surgeon Dr. Tom Catena was able to save Daniel's life, the boy still faced a life filled with uncertainty.

"Without hands, I can't do anything," Daniel, then 14, told TIME's Alex Perry. "I can't even fight. I'm going to make such hard work for my family in the future."

Mick Ebeling, co-founder and CEO of Not Impossible Labs, read the TIME article and decided to take action.

He traveled to the Nuba Mountains to meet Daniel.

"I'm just wired that way," he told Kevin Newman Live. "It's better to do something than sit home and watch."

He met with Catena and together they set up the world's first 3D-printing prosthetic lab and training facility at a local hospital where consumer-grade 3D printers could be set up to produce low-cost prosthetic limbs.

Daniel was the first to receive an arm.

The new appendage, which cost about $100 to make and took about six hours to print, isn't perfect — it needs special attachments to hold utensils and it can't lift heavy objects — but it has given Daniel hope.

For the first time in two years, Daniel can feed himself — and offer grateful hugs to the man who changed his life.

Ebeling calls the prosthetic-printing mission "Project Daniel." His research firm is offering the open-source design free of charge, hoping that amputees all over the world will benefit from it.

"We're hopeful that other children and adults in other regions of Africa, as well as other continents around the globe, will utilize the power of this new technology for similar beginnings," Ebeling said in a press release. "We believe Daniel's story will ignite a global campaign. The sharing of the prostheses' specifications, which Not Impossible will provide free and open-source, will enable any person in need, anywhere on the planet, to use technology for its best purpose: restoring humanity."

Before returning to the U.S., Ebeling taught people in the Sudan to create the limbs. They are now printing one limb a week without his assistance, Kevin Newman Live reported.
Dance as if no one's watching, sing as if no one's listening, and live everyday as if it were your last.

Life is not about waiting for the storm to pass. It's about learning to dance in the rain.
Top

11 year old Aidan Fisher performs Eruption and You Really Got Me with Steel Panther on Thursday, December 19th, 2013 at The Midland Theater in Kansas City, MO..
Top
269 posts