Social, economic and environmental issues in our ever-changing world.
120 posts

crankster wrote:Make sure the next homeless white vet you see ...

Pretty sure none of vets one is still able to see fought for freedom..

When was the last war when Canada fought for its freedom?
Top

Even Steven wrote:When was the last war when Canada fought for its freedom?

It started approx Feb 2020.
Some may view my politically incorrect opinions as harsh and may be offended by them. Some think political correctness will be our undoing. Zero cuckery. You and 917 others hate this post.
Top

Oh yeah, the great battle of COVID. Many have fallen. Their names shall not be forgotten.
Top

See, lives who do this don't matter: 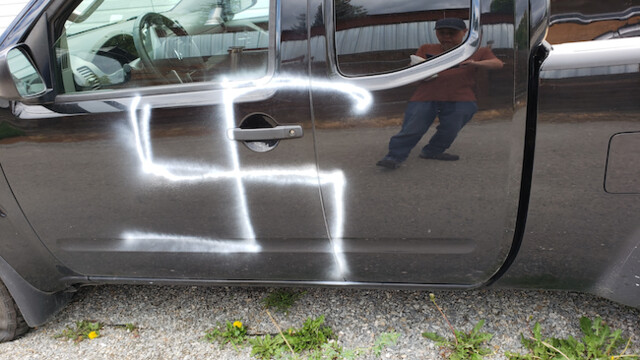 Even Steven wrote:See, lives who do this don't matter:

That is very sad. Not completely surprising given some of the posts we see here. Maybe just one dumb kid. Still very sad thing to see.
Stop hate: don't feed the alt-right trolls
Top

Even Steven wrote:See, lives who do this don't matter:

ya tell that the blm protesters who are beating white women up https://13wham.com/news/local/woman-att ... r-business
"The further a society drifts from truth the more it will hate those who speak it." -George Orwell
Top

the truth wrote:ya tell that the blm protesters who are beating white women up https://13wham.com/news/local/woman-att ... r-business

Oh, I guess that makes it OK.

the truth wrote:ya tell that the blm protesters who are beating white women up https://13wham.com/news/local/woman-att ... r-business

Oh, I guess that makes it OK.

no it does not, but since you think its ok that's on you
"The further a society drifts from truth the more it will hate those who speak it." -George Orwell
Top

It would appear some people just can’t stand not being the center of attention. BLM gets some attention and it drives a bunch of you crazy that everyone isn’t only talking about you.

BLM has been a focus for a few weeks and you’re screaming “What about me? Look at all of my problems. My life is so hard. I need attention. Look at me and all of my hardships. They have nothing to complain about. My problems are all that matters.”

There there little snowflakes... I’ll call you a whambulance.
Top

Interesting in the context of US election years, BLM and the predictable renewal of aggression around racism/anti-racism.

A movement, a slogan, a rallying cry. Black Lives Matter has had many identities since it was founded on a mission to “eradicate white supremacy and build local power to intervene in violence inflicted on Black communities ... ” Now, it’s important to ask whether the organization, officially called the Black Lives Matter Global Network Foundation, has made good on its promise to spur positive changes in Black people’s material lives.

But what appeared to be a changing tide in public opinion has since faded along with the protests. Support for the BLM movement reached a high in June with 67 percent of U.S. adults expressing at least some support for the movement, according to Pew Research. The figure had shrunk to 55 percent by September, Pew reported. Now, 48 percent of American voters support the movement, according to recent tracking data from Civiqs. (The recent number still shows an increase from pre-protest levels.)

The change is most notable among white adults. Their support for the movement reached 60 percent in June before falling to 45 percent, Pew reported (even though white Americans have adopted more liberal racial attitudes overall since the start of the BLM movement).

This has been a common trend throughout history, said Dwight Watson, associate professor of history at Texas State University.

“I expected white folks to disappear,” Watson said. “White support tends to peter away. The way you were taught to understand the world is ultimately how you respond to it in times of crisis. With that said, most young white people did not have an oppositional upbringing to police or the government. So many of them didn’t sign up to die for the cause. And after a while, many of them wondered if the cause is really that important.”

oldtrucker wrote:.. And why should anyone get involved in their baby producing bleepshow?....Quit bleeping reproducing. End of bleeping story.

Its the only FUN they can have for FREE on Saturday nite. Actually, if you think about it..their having 7 kids might help maybe two actually survive. Someone told me once that by feeding and "saving" 10 million starving ppl in Africa in the 60's and on..has resulted in 100 million starving ppl in Africa now and no one actually has the balls to say that they shouldn't be able to just pro-create at will. (or risk being called a NAZI) They do this with no regard to whether they can actually look after the children they create because they are ignorant, uneducated with about NO prospects of a better life and unable to figure out how to or whether they can (or want to) access birth control. The corrupt governments in control of their countries are too busy "looting" the system and buying "arms" to fight "the rebels" to worry about *their people* so these AID agencies get to step in and spend your: