True, unless you're my dad. Who took dozens of the same scene over and over, and kept every single bad photo in an envelop, we had no idea where he was most of the time, or what he even saw in it.

Chucked them all out.
If Putin stopped, he'd be saving Russian lives as well.
Top

Gramma Freddy took thousands of plant photos, all in different seasonal stages. Imagine sorting through those much less knowing what plants they were and growing where.

Wish we had gone out together too. I wasn't in her photographical league at all at that time. Now I would be.

Gardengirl, you aren't the only one thinking it!
If Putin stopped, he'd be saving Russian lives as well.
Top

Queen K wrote:The saddest thing about her awesome photography is that the family said they had no idea how to access her most of her thousands of photos. They had some printed but her vision was not attainable to them. Her albums were digital and passwords were gone with her.

And that is what will happen to most of us if we don't get printing.


Yes, her family had printed all the condolences form us Castanet family people who had posted in her obituary here. They had the posts printed and at that door on a table as you walked in. They also talked about how they marveled about how she spent so much darn time with us.

This brings up a very good point, with all online sites & storage (photos). Having ones users names & passwords included in the Will, is something everyone needs to consider.
Without the knowledge of that info anything stored is lost forever.

Added: Of course those sites that is none of your Families business, don't add them. lol
I don't give a damn whether people/posters like me or dislike me, I'm not on earth to win any popularity contests.
birdsarentreal.com
Top

Unless you want them to know that the old stove wasn't entirely out.
If Putin stopped, he'd be saving Russian lives as well.
Top

^^^ lol
I don't give a damn whether people/posters like me or dislike me, I'm not on earth to win any popularity contests.
birdsarentreal.com
Top

Speaking of the hard copies, grammfreddy would have liked this story: 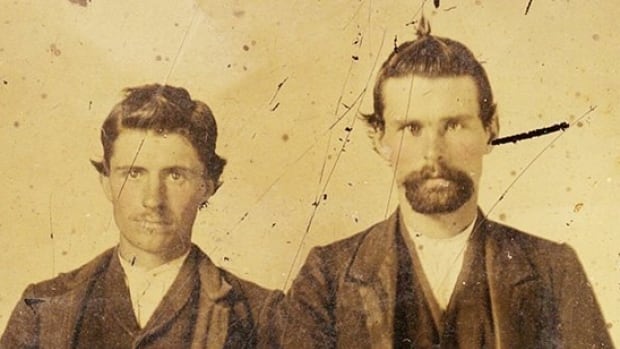 The last known photo of American outlaw Jesse James is the real deal, according to the forensic expert who authenticated it.

Lois Gibson says the photo's owner, Sandy Mills, spent 12 years trying to convince people the man in the photo really was the infamous icon of the West who robbed banks, stagecoaches and trains. The forensic artist says the photo is in remarkably good condition. She estimates it could fetch $2 million to $4 million at auction.

"Ìt just seems so earthy, like they'd just stepped off the street," Gibson told As It Happens' Carol Off of the sepia-toned picture. And even more remarkably, she says the man sitting next to James is Robert Ford, a member of James's gang who eventually shot and killed him in 1882 to collect a bounty.

Gibson, who is in the Guinness World Book of Records for identifying more than 1,260 people through her forensic work, says she started the identification process by looking at all known photos of Jesse James. Initially, she tried to prove it wasn't him.

"But every single thing that I examined, I could not eliminate him." The man in the photograph shared all the same characteristics as Jesse James: the same different-sized eyes, the same distinctive eyebrows, everything. "It got down to every single detail that told me, oh my gosh, this is Jesse James."

Ohh great story! GF would have loved it for sure.
If Putin stopped, he'd be saving Russian lives as well.
Top

On Castanet, I hated that old boot.

I did get to meet her in person, and of course fell in love with her. She was a real character. All the things she would mention on Castanet, she really did live. What a lady.

I miss her, too.
Top

Very sad news indeed. Met Sue a few times and what a nice genuine lady. Always had kind words for me on the forums. My condolences to her family and close friends. RIP Sue.
"It's what you learn after you know it all that really counts."
Top

Guess more than a few have been thinking of the ones that are missing. I haven't deleted her private messages even after all this time because I don't want to lose the warm fuzzy feeling she left me with. And I'll never look at a rolling pin again without thinking of her. Good time of year to remember those that we care about.
Truths can be backed up by facts - do you have any?
Fancy this, Fancy that and by the way, T*t for Tat
Top

I haven't been able to stop thinking about grammafreddy lately. I read, sign in thinking about commenting, then just sign out. No one could put things as eloquently as GF, that rolling pin sure would come in handy these days, some posts are mind boggling. Hope you're taking lots of pictures in heaven GF, it's hell on earth right now.

Just the other day I was looking out on my drive way and the memory of her being her and locking her keys in the van welled up.
If Putin stopped, he'd be saving Russian lives as well.
Top

Saw a thread about the Bypass idea, saw her mentioned & now discovered the passing to her Journey