Discuss the upcoming provincial election. Keep it civil in here, people. It's not the Political Arena.
38 posts

so is this the last day for the liberals to enjoy being government? It would appear so, thankfully.

What are your predictions? How many seats will each party take? how many independents will get elected?

Here are what some predictions from the "experts" and "pundents" ... agree/disagree?? most of the following give riding by riding predictions as well.

Our totals now add up to 57 seats for the NDP, 27 seats for the BC Liberals, and one seat for an independent. See how our forecasts break down by riding here.
http://thetyee.ca/Tyeenews/2013/05/13/U ... Forecasts/ 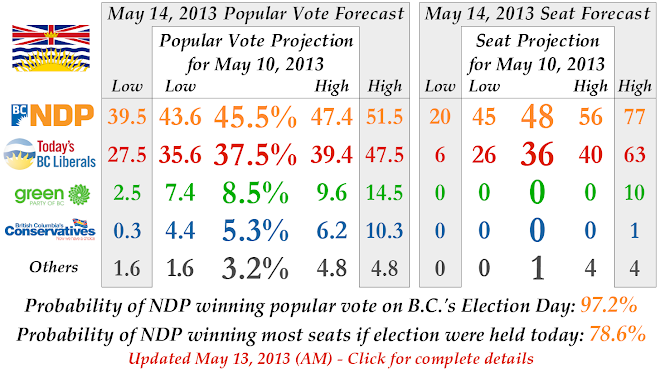 If those predictions come true it will be a much better scenario than a 77-2 slaughter as we saw in 2001. There needs to be an effective opposition and it would also allow the Liberals (under that name or a new name) to rebuild within one election cycle. It will certainly be a monumental upset if the Liberals end up winning and while I won't make any predictions myself I won't quarrel with yours or the others that you posted.
Top

A majority is a majority.

Simple as that, Urb.
Top

I don't really know what to expect tomorrow logi. IF those had been posted at the start of the election, it would have seemed quite likely as a result, however so many areas have changed that it could very well be a minority all the way to a big kicking.

I just really couldn't guess. Dix seemed to be just a bad campaign, but I don't know if he truly lost as much as some polls indicated.

No matter what should be an interesting day.
Top

Liberals out, NDP in. Not a huge margin, but substantial. However, I do think Kelowna and Westside Liberals will stay. Vernon will be orange though.
Sarcasm is like a good game of chess. Most people don't know how to play chess.
Top

^Not so sure about that Cap'n. I think the Conservative candidate stands a good chance of taking Foster out (which is good).
Chill
Top

I wouldn't hazard even a carefully calculated guess what will happen tomorrow in terms of seat count, one reason being I have very little faith in polls accomplishing anything but causing the sheep collectively to turn into the wind, ....and I have direct experience with an electorate turning on a dime and handing back unexpected change on election day, particularly if an unusually strong turnout happens. I do think the urban/rural divide and the notorious BC polarization will persist, perhaps be even worse than it has ever been, and we will end up with just another crappy government.

The furthest I will go out on a limb is project a very close minority government for the Liberals, and that just comes from the gut with nothing of substance to support it rationally. I know that depends on some "others" (Greens, Conservatives, Independents) getting elected, and I think if that doesn't happen we are looking at another Liberal majority, albeit a very thin one...

....beyond that I can only say I hope I am very very wrong, and that the electorate collectively decides to give the Conservatives a shot at the very last minute.

NAB wrote: ... we will end up with just another crappy government.

I'll put money on that !
And then there is our resident right-wing troll who tells us name calling is childish.
The hypocrisy is just pitiful and way off the charts and so very strong in this one.
Top

^Any road, guaranteed it will not be 'quite' as crappy as we have had for the past 12+ years. It would be poetic if Christy won her riding and led her party as Opposition (which I think is what the NDP would quite like).
Chill
Top

I here that independent candidate in Kelowna mission has a lot of support there .she could be the swing vote to oust that liberal there
Top

Do not think this is going to happen.
Top


Going by the latest poll that showed Clark with 43 seats as of last Wednesday. Dix has gone nowhere but down since then.
ΜΟΛΩΝ ΛΑΒΕ


Going by the latest poll that showed Clark with 43 seats as of last Wednesday. Dix has gone nowhere but down since then.

cant wait to see what happens....think you are waaaaaaay off...
Top

i think the ndo will win, but im not big dix fan , they could have done better in a leader
Top