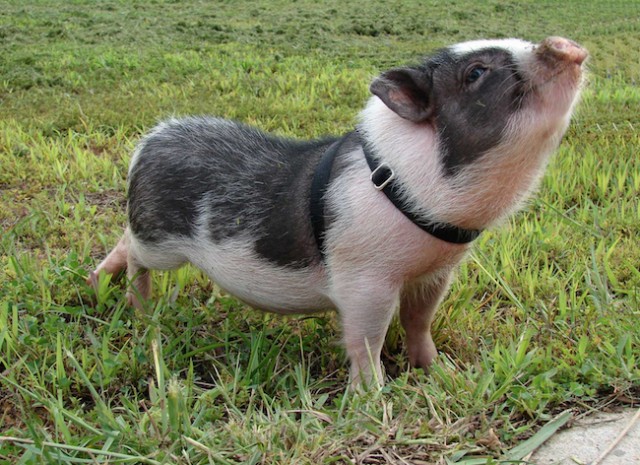 Vernon city council has saved the bacon of one local pet owner by allowing her to keep her potbellied pig.

Andrea Lamont approached council earlier this year looking for permission to keep her pet pig following a complaint from a neighbour.

Under city bylaws, no farm animals – except chickens – are allowed to live in urban areas, but Lamont's pet porker is safe after council debated the issue and decided the pig can stay.

Coun. Juliette Cunningham said bylaw complaints should be looked at on a case-by-case basis, and in this case the pig should be allowed to stay in the city.

Coun. Scott Anderson agreed saying he has done research on potbellied pigs and does not see a lot of difference between them and dogs.

Anderson said the main complaint the city has received about the portly porker is its size and smell, but he noted some dog breeds can get larger than a 100-pound pig and can also have an aroma.

“There are some big dogs out there. They can grow to more than 150 pounds,” said Anderson. “The argument against them (pigs) don't seem to wash too well.”

Anderson said if the city allows Lamont to keep her pet, it does not mean people will be bringing home lions or other such animals as pets.

“I'm certainly in support of letting these people keep their pet,” he said, but added it does not mean there will be pig farms in the middle of the city.

Coun. Brian Quiring was not so fond of the pig proposal.

“I don't want to see a 200-pound pig walking around my neighbourhood,” said Quiring. “We have bylaws for a reason. It's crazy to think we can allow a pig to walk around somebodies front yard oinking and snorting.”

Counc. Bob Spears said the city is aware of three other pigs in the area and was wondering what would happen to them.

“It's a case-by-case basis,” said Cunningham. “We allow six chickens and I think pigs are cuter than chickens.”

Mayor Akbal Mund also had some reservations about the pet porker, wondering if allowing the pig will open the city up to other farm animals.

“This opens it up for everybody else and we may be inundated,” said Mund.

Council agreed to allow the pig to remain by a 4-3 vote.

How dare that pig oink and snort and carry on all pig-like?

Good grief there's a bunch of grumps in Vernon.

There's plenty of terribly inconsiderate pet owners whose animals leave messes and making noise at all ungodly hours. Why discriminate against the poor piggy? Give them a chance and they can be subject to the same bylaws as ever other Joe Pet Owner out there.
Top

Pigs are cool. And smarter than any of the politicians that voted against this. Probably smell better too.

I like Scott Anderson. I think he has a bright political future, if he's so inclined.
"I don't even disagree with the bulk of what's in the Leap Manifesto. I'll put forward my Leap Manifesto in the next election." - John Horgan, 2017.
Top

Yes there is.
Good to see some rational thought win over
Top

I'll take a pig eating garden waste over a pig at the trough any day of the week. It will be some of the only bacon I earned that they will never be able to get their jowls on. At least until the Senate determines that CRA can audit my freezer contents as well.
Do not argue with an idiot. He will drag you down to his level and beat you with experience.

The problem with the gene pool is that there is no lifeguard.
Top

Ah a word for miniature pigs as pets.

Piglets vs. dogs and cats

Pigs don't bark. They can be trained like dogs. They are smart. They can't jump on kitchen counters, your favourite pillow like cats after they have scratched around their kitty litter burying their dodoos. They don't shed like some cats and dogs so less chance of allergies. They don't shred you furniture to sharpen their claws. They don't bring their owners gifts of little carcasses of mice and innocent birds as some outdoor cats like to do.

Surprising there aren't more pig pets around except for bylaws.
If we ask the right questions we can change the world with the right answers
Top
6 posts • Page 1 of 1