This is inside the castle 2 years ago. 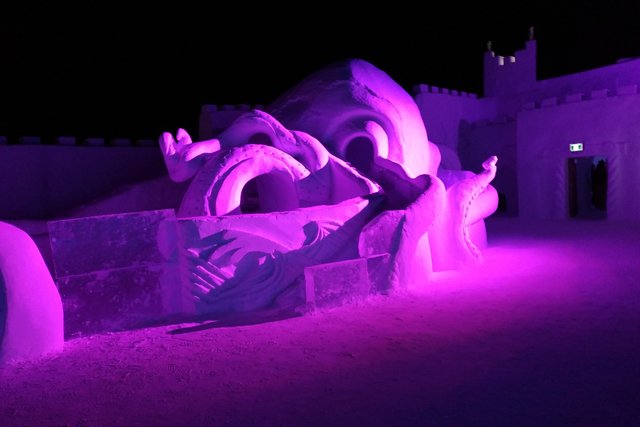 My good friend Johnny was playing on the bass guitar with this band. 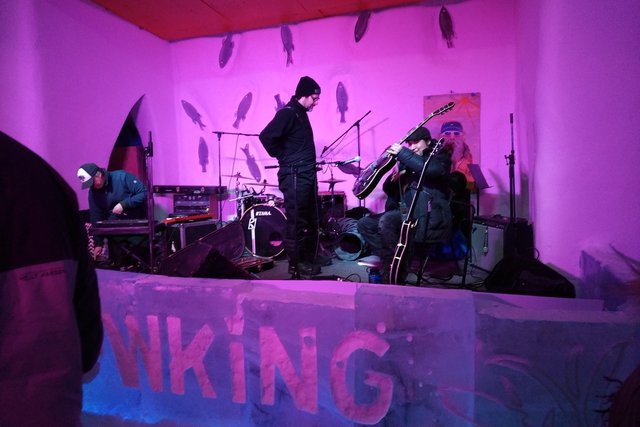 The snow Fest is always the first week of March and if you can handle the cold a magical experience.
Top

oldtrucker wrote:Last time I did the ice road thing was about 20ish years ago....1 trip only. I think I got like .25c mile.
How much does a class 1 er make a day up there?

Comes to about $1000 per rounder as an employee including bonus.
I believe owners get something like double that.

I have a meeting in a few minutes and am heading up tomorrow early.
I will take some pictures along the way and share them asap.
Top

We drove up to the mine yesterday, and I can tell you the coldest temperature the outside thermometer in a 2021 Ford F350 registers.
Or just show you. 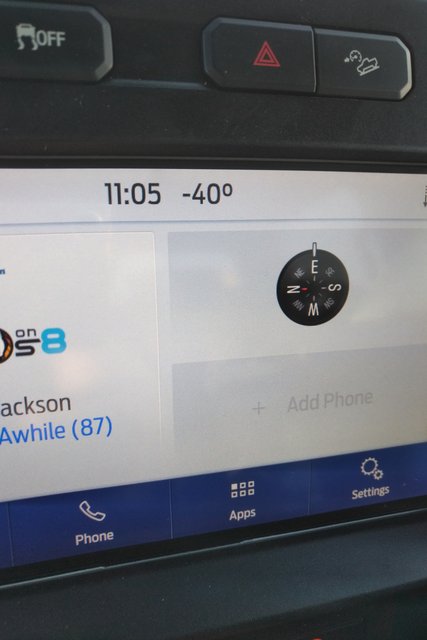 Apparently Propane gells at -44 and the bottles at one work camp were all frozen.

On g good note, it was beautiful outside. 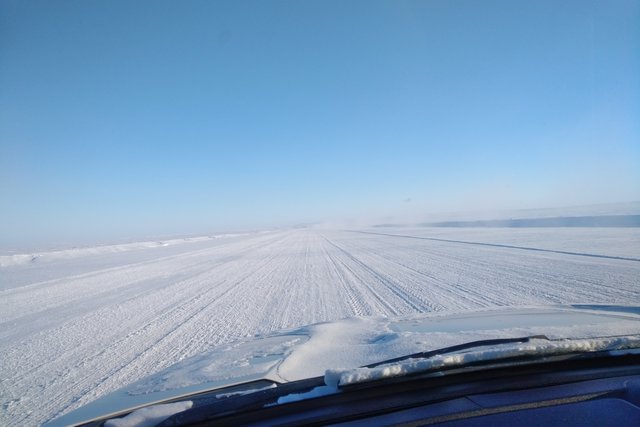 Good luck in your new job!
"In a world swathed in political correctness, the voting booth remains the final sanctuary where the people are free to speak" - Clifford Orwin
Top

ohhhh, can you please bring me back a wicked large diamond? TIA
I had to put on a hoodie, so cold from looking at those pictures. And I've wintered in Whitehorse!
Am I free tomorrow? No I'm expensive every day
Top

From the sound of it you had better keep that hoodie on Norma.

It looks like Mother Nature is giving you warmer weather on my bi,rthday February 11th

https://www.castanet.net/news/Vernon/32 ... t-few-days
You are welcome, but sorry it isn't a social distance hug instead

Oh, if you owned a diamond mine, would you let Me of all people anywhere near the diamonds

I am just associated with the winter road service for a reason.
Top

A little warmer today but a storm is blowing in.

They are taking care of us, but it is a little scary around here.
I am keeping to myself as much as possible.
However I will most likely be in self isolation for 2 weeks after it's over.
That means no coffee with Old Trucker Or anyone else here

Not to mention, no good beans at home at the moment

^^^ Guess there are no bugs this time of year.

Interesting place to have kimberlite pipes.
Stay safe up there...
I am not wealthy but I am rich
Top

I am considered as an Essential service, so I am still working and it looks like I may be tested daily.
The test isn't painful, but it sure isn't pleasant either.
Since there is only a 6 to 8 week life cycle to this road, it's a little tough delaying the trucks any more than necessary.

We are sort of expecting the first loads to arrive tomorrow, however the storm may delay things a couple days.
The snow drifts were already 2 feet deep in a protected area earlier today.
Top

The road was originally going to open on the 8th ( it usually opens on February 1st ) however a winter storm blew in.
So they had to plow it clear again. 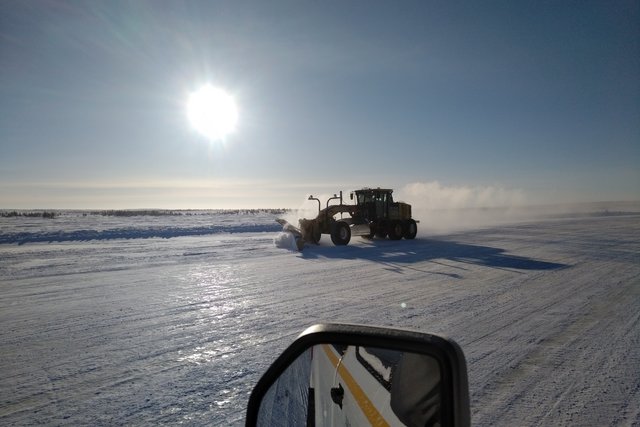 This was the first convoy, on the 10th 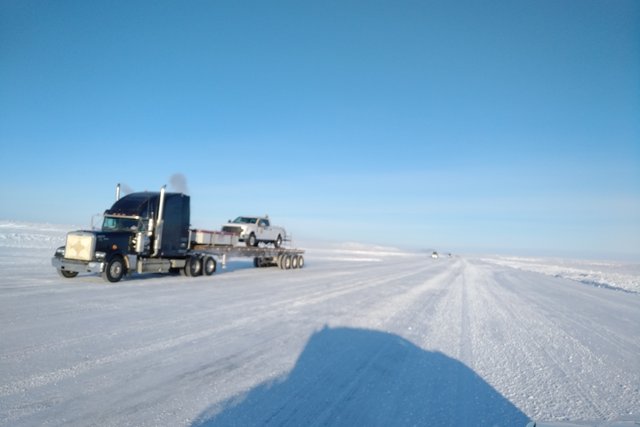 There are 4 trucks in there, all spaced 500 meters apart. 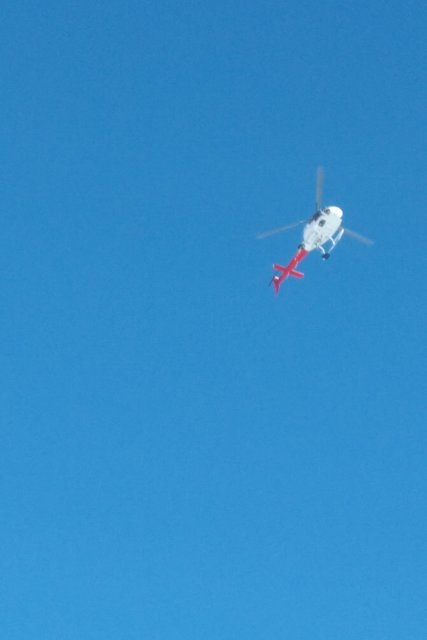 And I made a new friend yesterday. 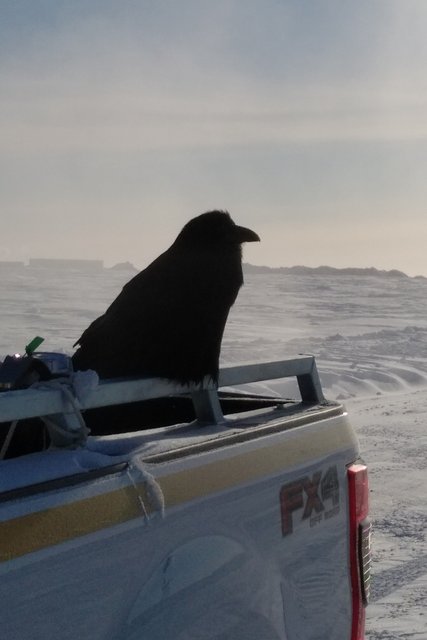 She told me her name is Gawlk,
I do have a cute video of her but will have to wait until the great land of data and good wifi before sharing it.

Then today, when I woke up I swear I had aged year overnight 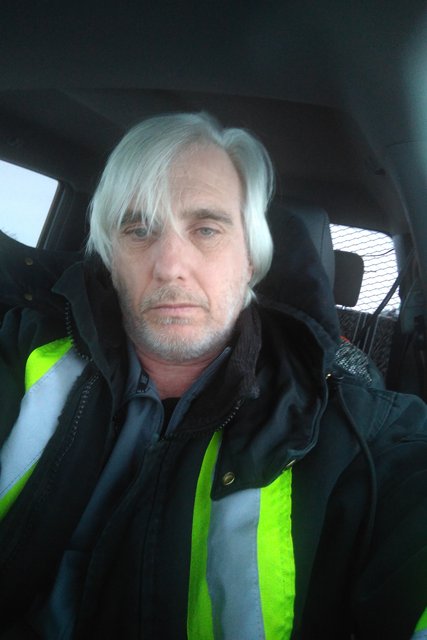 That is about all for the day.
Top

You're hair is a tad whiter, but I believe you've been under incredible stress lately.

Loving the new photos and hope to see your vid of your new friend. I just realized, she's hitchin' a ride! Keep up the good work, you be braver than I Stuphoto!

Stu of the Ice Roads!
If Putin stopped, he'd be saving Russian lives as well. Never thought the right would have a field day but June 24/2022 it is.
Top

I'll give you a tip.
Don't call your hair colour white. It's called Arctic Blond.
I_am_a_Canadian (with unacceptable views)

"I reject a society where every desire becomes a right. Where I have no responsibilities, I have only rights."
Top

Thank you Queen,
It has honestly been a tough month.
Just little things, as you can probably imagine, like I always called my mom the moment I arrived in Yellowknife to tell her I was safe.
I caught myself starting to dial her number, and realized she couldn't answer.
However the good thing is I have several long term friends who I consider as family working up here beside me.
They have all been great

Love it,
Thanks for the laugh and smile.
I needed it

Not much in the line of photos today.
I did find an exceptionally clear patch of ice. 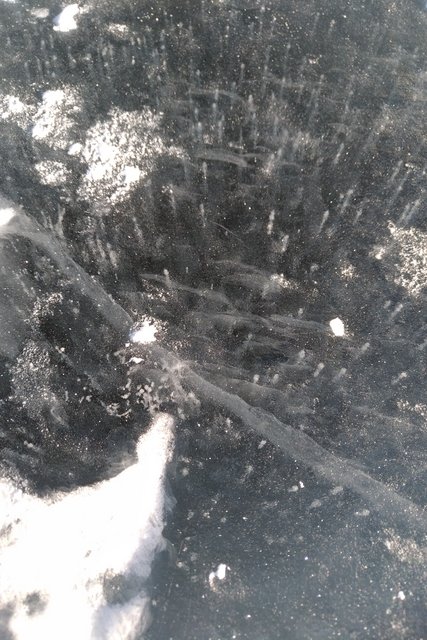 However it was still an exciting day.

I should say that only experienced drivers with proven track records are allowed on this road.
So there are rarely any issues on it.
Last year there was only one spinout all season that I am aware of.

Well there was a spinout today just 2km ahead of me.
I didn't really feel like calling in a tow for him, which would have taken 2 to 3 hours to arrive ( a grader working ). Plus extra paperwork for me.
So I halted traffic for about 30 minutes and helped him chain up and get over the hill.
One simple mistake he will never make again.
Oh he is a good and very polite Russian driver.

Then a short while later I was involved in my first ever high speed chase.
The first nations hunters are allowed on the road, but the rule is they must have one of us between them and the mine.
They all know this but from time to time one will see we are talking or busy and try making a run for it.
So it is our job to chase them down and get infront of them.

Well that happened today as I was talking to a coworker.
One saw us and pinned it.
I got in front within 3 or 4km. When I pulled aside him I gave him a polite wave and he slowed down to 60, then turned around 10km later.
I should explain, I am the only one on patrol who isn't a retired police officer, so I think my coworker was surprised I pulled it off so quickly.
I have to admit I thought it was a rush.

Anyway after that it was just a slow drive back to the camp enjoying the view.

Well goodnight everyone,
I gotta get up at 4 and get another Covid swab done.
Top
65 posts